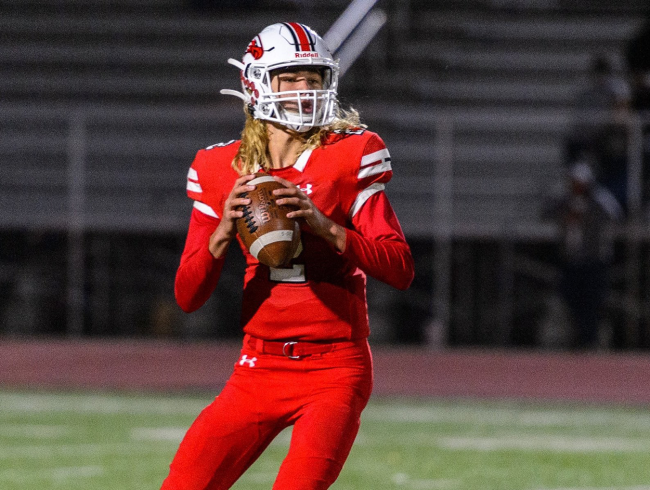 For quite some time, Avery Johnson was flying under the radar. That is not longer the case, and deservedly so.

The 6-foot-3, 175-pound quarterback from Kansas is quickly becoming one of the most sought-after players in his class and earned an invitation to the Elite 11 Finals last weekend. As a result, he will have an opportunity to compete against the other top quarterbacks in the Class of 2023 — like Nico Iamaleava and Jaden Rashada — with a chance to be named the best quarterback in the nation.

And he has a legitimate shot.

His play, combined with strong testing marks across the board, make Johnson a recruit to watch.

Big-time testing numbers posted by the quarterbacks at today's Nashville #Elite11 regional – here are the unofficial Top 10 ratings from the combine events 💪🦵💨 pic.twitter.com/Q6aCXa9pfF

He currently holds 24 offers from schools like Arizona, Oregon, Virginia, Washington, Tennessee and Notre Dame, but is considered a Kansas State lean.

While at the Elite 11 Regional in Nashville, Johnson was impressive. For someone of his height, his twitch is impressive.

And he was throwing throwing.

Avery Johnson is one of the most athletic QBs in 2023 (check out his basketball tape). I wasn’t expecting him to thrive in this setup but he was on point & looked more technically sound than I hoped. Good day for him pic.twitter.com/KtIvrvjCNP

Johnson wants to be known as a conventional passer who just so happens to be athletic. He is crazy athletic.

While he can throw well on the move, Johnson is even better in the pocket. He is also surprising fast and ran a 4.54-second 40-yard dash, which is really impressive for a 6-foot-3 rising senior in high school.

In addition to his consistently impressive performances on the football field, Johnson also shows off his agility and speed on the hardwood. He was the leading scorer as a sophomore for a Maize team that lost only two games and won the Kansas 5A state championship.

When he has the ball in his hands, you never know what is going to happen.

His bounce is next-level.

And he’ll even throw down on your head top with a vicious poster.

Also has multiple FBS offers as a QB in the class of 2023. All-Non Senior pick from SIK last fall. Between this dunk and the one earlier this year of Kyle Grill, safe to say two of the best dunkers in the state on the same team. #sportsinkansas pic.twitter.com/5PCuCKcLs2

Needless to say, Johnson is a freak athlete. He might not carry the Manning name or an NIL deal like Iamaleava, but that’s okay. Avery Johnson knows who he is and is set out to prove the people who didn’t believe in him wrong. And he will.