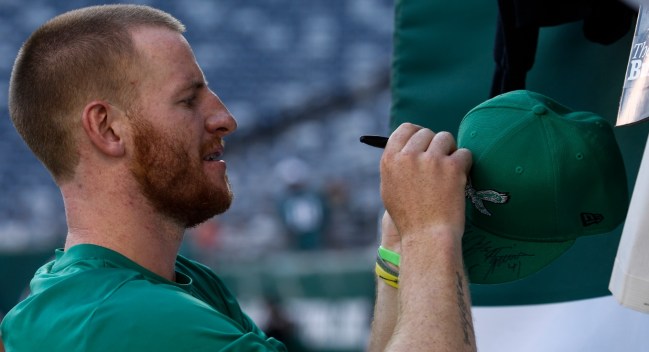 Eagles fans appear to have stooped to a new low on Twitter.

On Wednesday, well-known Eagles superfan Giovanni Hamilton, who went viral just a few months ago when he uploaded an emotional video after Carson Wentz got traded, posted a pair of photos on Twitter wearing Wentz’s new Colts jersey after the QB sent it to him as a gift.

thank u @Colts 🙌 i am so happy to have my guy @cj_wentz new jersey pic.twitter.com/jNNUQwzPPj

Despite the fact that Gio is only 13-years-old and disabled, some Eagles fans still decided to cyberbully him for wearing the jersey.

i am gonna take a couple of days off guys, i remember how bad it got here when i wore a travis kelce jersey

i just wanted to thank the Colts for welcoming me to the team and for making sure i got my fav player’s jersey for therapy this week.

be kind on and off the internet💚

According to Gio’s parents, one Eagles fan went as far as to say that he wanted to break Gio’s kneecaps for wearing the Wentz Colts jersey.

The new rules for Giovanni and social media. If any of our friends want me to pass along a message to him at anytime please send me a DM. I’ll make sure he gets it. But he’s not engaging on here anymore. He will just post his content and get off. pic.twitter.com/UaUVXk82VJ

Several users were banned by Twitter for bullying Gio but it’s probably a good idea for him to stay off social media for a bit because people can’t stop being assholes.