Baker Mayfield Has Fallen Off A Statistical Cliff, Is Far Worse Through 6 Games Than He Was Last Year 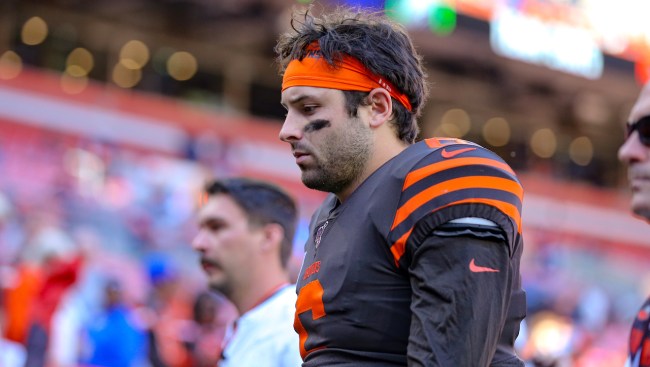 Heading into the 2019 season, Browns fans — and National Football League fans in general — entered the year with hopes that the moribund Cleveland franchise would finally compete for a spot in the playoffs.

Unfortunately for football fans, though, the Browns have remained true to their pathetic selves and have started the season in borderline disastrous fashion, as they currently sit at just 2-4, with one of those wins being an unconvincing victory over the third-string quarterbacked New York Jets.

While the Browns have been shambolic in multiple facets of the game, perhaps the biggest cause for their downturn has been the performance of their second-year quarterback Baker Mayfield, who has fallen off a major statistical cliff to kick off his sophomore season.

During his first six starts of the 2018 season, Mayfield threw for 261 yards per game on a 59.1% completion percentage while throwing 10 touchdowns and seven interceptions.

Through the first six games of this season, Mayfield is passing for 249 yards per game on a 56.6% completion percentage while throwing just five touchdowns and 11 interceptions.

In other words… YIKES!

Not his fault on this play but this is the 3rd INT for Baker Mayfield today.

He now leads the league with 11 INTs in 6 games. He passed Brandon Weeden's 2012 mark of 10 INTs in 6 games for Browns QBs.pic.twitter.com/56oZDSTrHW

Despite now having Odell Beckham Jr. at his disposal — a player who is supposedly one of the league’s elite wide receiver –, Jarvis Landry, and Nick Chubb, Mayfield’s numbers are down in every major statistical category thus far this season, which is not something you want to see from the former #1 overall pick in the NFL draft.

Baker and the Cleveland Browns’ fortunes aren’t getting any better anytime soon, as they head to Foxboro to take on the undefeated New England Patriots following their bye week this weekend.