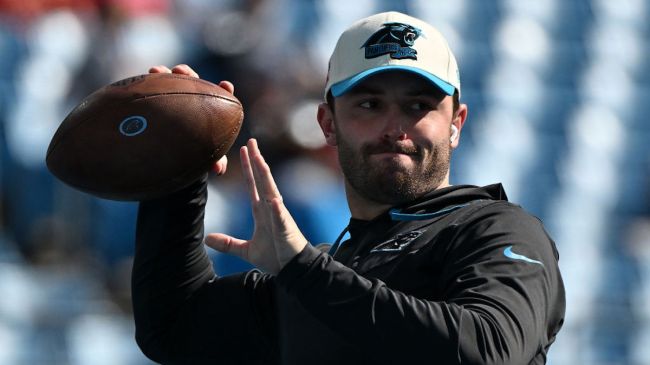 Despite the fact that he’s now healthy and able to play, Carolina Panther quarterback Baker Mayfield will remain as the team’s backup quarterback to newly-named starter PJ Walker, who led the Panthers to a win over the Tampa Bay Bucs in his first start of the season.

Speaking to reporters on Thursday, Mayfield addressed the fact that he’s now serving as a backup for the first time in his NFL career, barely halfway into the 2022 NFL season.

Baker Mayfield has addressed being named the backup quarterback to P.J. Walker for the Carolina Panthers for the first time.

“I came here to win. If it’s my role to help PJ out from the sideline and help this defense out with scout team stuff, I’m gonna do it. And I’m gonna do it with everything I can.”

Hilariously, following the Bucs’ brutal Thursday Night Football loss to the Baltimore Ravens, the Panthers — sitting at the bottom of the NFC South with a 2-5 record — are actually just one game behind them, and first place in the division, heading into a winnable matchup against the Atlanta Falcons this weekend.

Unfortunately for Mayfield, after being shipped out of town by the team that drafted him (the Browns took the former Heisman Trophy winner with the #1 overall pick in the 2018 NFL Draft) and being benched by the team that traded for him, Mayfield may be staring down the barrel of a career as a backup.

RELATED: The Panthers Have Lost Their Coach, WR, And Star RB Since Baker Mayfield Came To Town