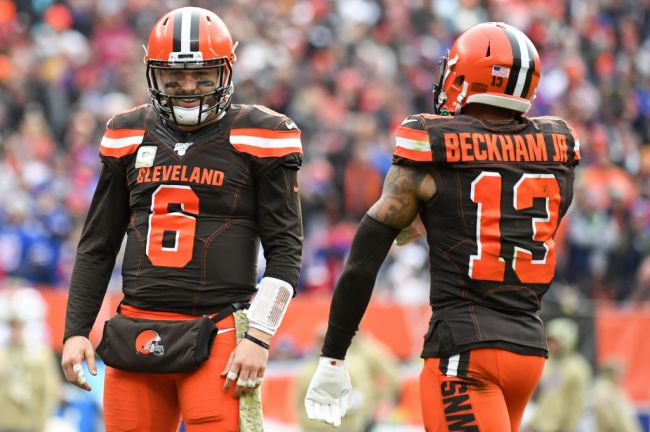 The Browns may have lost to the Ravens on Monday Night Football, but there’s no denying that this Cleveland team seems to have figured something out. The Browns have won four of their last five games giving them a record of 9-4 in a prime position to make the postseason for the first time since 2002.

The biggest factor of Cleveland’s recent success has been the play of quarterback Baker Mayfield and he’s been able to take this team to a new level without the most talented wide receiver on the roster, Odell Beckham Jr.

OBJ went down with a season-ending knee injury against the Bengals in Week 7 which is about the same time Mayfield flipped a switch and started playing at an extremely high level. In his seven starts dating back to Week 7, Mayfield has 13 touchdowns and just two interceptions. Through the first seven weeks of the season, he had 10 touchdowns and six picks.

Given Mayfield’s success and the Browns making moves in the AFC since OBJ went down with his injury, this made ESPN’s Mike Greenberg raise the question of whether or not Mayfield is actually better without arguably his best playmaker alongside him. During Wednesday’s edition of ‘Get Up,’ Greenberg said it was “inarguable” that Mayfield is better off without OBJ.

“Some quarterbacks need to be the number one guy on their team. Some of them just do it naturally, and others may have a little more difficulty with that,” Greenberg said. “One way or another, I think it is just inarguable that Baker Mayfield has been better since Odell Beckham went out.”

"One way or another, I think it is just inarguable that Baker Mayfield has been better since Odell Beckham went out."

Based on the numbers, Greenberg has a very legitimate point and it is in fact inarguable that Mayfield has been better without OBJ this season than he was with him.

If you’re Beckham Jr., it’s probably nice to see his team push for a playoff spot, but on the other hand, it can’t bode well for him or his future in Cleveland.