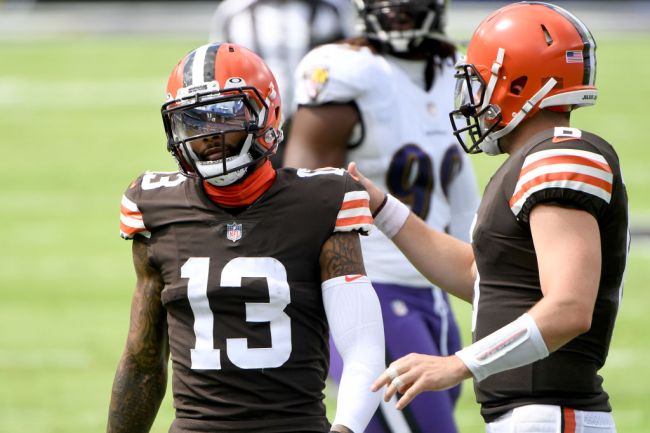 According to a new report from Ian Rapoport of the NFL Network, the outspoken Beckham might have played his last game in a Browns uniform.

Rapoport cited several different reasons for a Browns and Beckham divorce, including the wide receiver “never really fully embracing” the team or city and a “never had a good rapport with Baker Mayfield.”

From @NFLGameDay: The #Browns will play their first game without WR Odell Beckham today, and he may have played his last game in Cleveland. pic.twitter.com/d5UI0bK627

The idea that Beckham and Mayfield don’t get along seems odd, considering Mayfield called Beckham a guy who “fights for his team.”

The idea that Beckham has never embraced or fit in with the Browns certainly does not feel true, largely picking up on something that has been floating around since the Browns acquired Beckham from the New York Giants.

Beckham himself has said the first year was a challenge, but that it was mostly due to the ailments he was battling. In his second year, he had shown to be a real asset in the locker room and helping to bring this group together. The relationship between he and Mayfield was a positive one with mutual admiration.

In fact, Beckham said either this season that being the Browns is the happiest he’s been since college, backing up a statement made by college and Browns teammate, Jarvis Landry.

Rapoport stating that the team is “better off” without him also seems like a stretch after just three quarters against a 1-5-1 Bengals team.

Whoever shared this information about Beckham and the Browns probably comes from inside the organization and, for some reason, wants to fan flames of Beckham being a malcontent to make a possible trade out of Cleveland easier come spring.

[via The Rap Sheet]