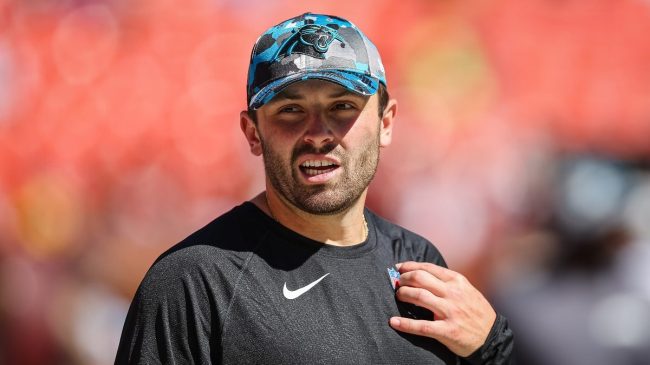 The NFL is about to kick off the 2022 season and everyone is absolutely excited about it. Some, more than others apparently. A coach of the Carolina Panthers was caught smelling or kissing a football and quarterback Baker Mayfield had a rather hilarious reaction about it.

Where is Michael Scott when you need him? In a hysterical video released by the Panthers media team, we see James Campen, the offensive line coach, smelling a football.

Additionally, Baker Mayfield and Sam Darnold watch Campen and can’t believe their eyes. Watch the clip for yourself below.

Ahhhh the smell of football 🏈 pic.twitter.com/y30kPVSBde

Baker Mayfield is right. Kissing the laces of a football is an interesting strategy indeed. Nearly everyone loves football. It just turns out that this Panthers coach has a really weird way of showing his love for the game.

This could be Campen’s good luck ritual though. There are plenty of weird things players, coaches, and fans will do just to hopefully have some good fortune on gameday.

If the Panthers win Week 1 then maybe Baker Mayfield and the fanbase should consider doing the same. James Campen could really be onto something!

At the end of the day, this man just can’t get enough of football, and neither can we. He might be into it quite a bit more than others, but who are we to judge?

Don’t miss the Panthers season opener as Baker Mayfield leads his team against the Cleveland Browns on Sunday.