Baker Mayfield Selling Special T-Shirts For His First Game Against The Browns, Fans Can’t Believe It 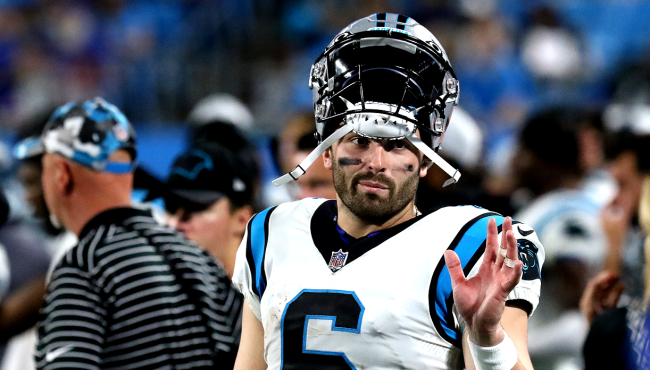 New Carolina Panthers quarterback Baker Mayfield will be facing his former team and the team that drafted him, the Cleveland Browns, in week one.

It was reported on Wednesday that Mayfield told Bills sideline reporter Cynthia Frelund that he was “gonna f— them up,” referring to the Browns.

Mayfield then vehemently denied ever saying such a thing (because that would be really dumb), adding, “That is not how I phrased it. It’s not even what I said.”

Frelund later tweeted about it and apologized for sharing “a private conversation.”

Oh boy, this is silly. Don’t make this more than it is. I was wishing him good luck, colorfully. He agreed with me, colorfully. What do you expect anyone to do in this situation… #browns

“[Mayfield’s management team] would have preferred I didn’t say it,” Frelund told ESPN. “They’ve worked very hard to be very mindful of this. I believe it was very clear my intentions and the actual contents of what was said was made clear and that it was taken out of context.”

Whether or not Baker Mayfield said what Frelund claimed he said about the Browns, there is no denying that the 2017 Heisman Trophy winner has the September 11th game against his former team circled in red.

How else does one explain him tweeting out a brand new collection of officially licensed T-shirts that literally address Mayfield playing the Browns in week one?

“BAKER MAYFIELD ‘OFF THE LEASH’ … LIVE & IN-PERSON … CAROLINA VS. CLEVELAND … ONE DAY ONLY,” reads the type on one of the t-shirts showing Mayfield wearing a cowboy hat above a picture of a broken chain attached to a spiked dog collar.

They’re here. The ONLY officially licensed shirts out there https://t.co/hrjzFNPhxc

It’s very interesting that Mayfield would release a t-shirt such as this a full nine days before actually playing the game.

As if the Browns defense needed even more motivation to go hard after Baker on Sept. 11 (they don’t), this will surely give it to them.

It wouldn’t even be much of a surprise if one of more of these t-shirts ended up making an appearance in the Carolina locker room before the game.

Many NFL fans were amazed at Mayfield being so bold.

That’s no joke. Baker better keep his head on a swivel in week one.

Do they sell them at the Cheesecake Factory?

Baker Mayfield:. "I've learned my lesson and moved on!"

Just imagine the comments on social media if Mayfield and the Panthers don’t beat Cleveland.

Baker: “I’m going to do all my talking on the field.”