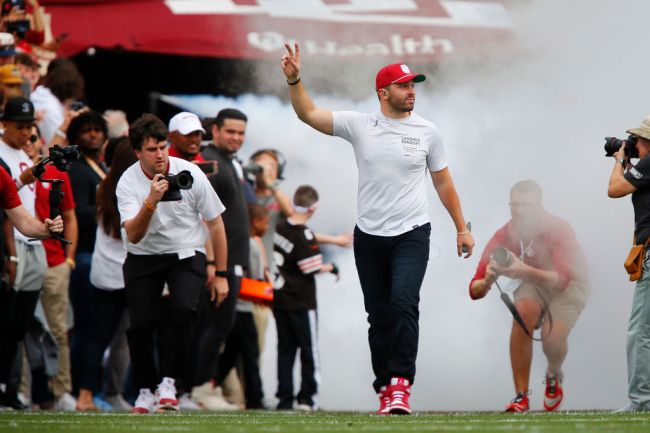 Baker Mayfield may be in the most uncomfortable situation in the NFL right now. After playing through a shoulder injury for most of this past season that would wind up requiring surgery, Mayfield was kicked to the curb by the Cleveland Browns.

To make matters worse, they did so after making it seem like Baker would be their guy for next season. They also proceeded to do it while forgetting to first make sure that he wasn’t still on the roster.

Now, Baker finds himself having been replaced by the very controversial Deshaun Watson and without any idea where he will play next season.

It was even revealed today that is unlikely Baker will be dealt before the first round of Thursday’s draft and he will now need to be carefully watching that draft to see what options remain for him by Friday.

This weekend, Baker Mayfield got some time away from the situation as he had a statue dedicated to him by Oklahoma and got the chance to attend his alma mater’s spring game. While he was there, he discussed his situation.

'@BakerMayfield looks ahead to life after the Cleveland Browns: "Everybody at the next level, throughout their careers, they hit a low point. And it’s not about that low point, it’s how you handle it."

“I haven’t been in this specific situation before, but it’s familiar territory when it comes to mindset and getting back to the basics and realizing what I need to do. And right now, I can control getting healthy, working and giving everything I have to wherever my next home is.”

Baker also added the mindset that will allow him to push forward after this disappointment.

“I think obviously, there’s a lot of ups and downs. That’s just life. Everybody at the next level, throughout their careers, they hit a low point. And it’s not about that low point, it’s how you handle it. I’ve said that, it’s never the actual adversity or the challenge, it’s what you do with it and how you set your mind to it.”

It’s a sad ending to Baker’s Browns career after he revived a franchise that had won 1 game in 2 years before his arrival. Maybe things will go better with whoever is smart enough to pick him up after round 1 of the draft.