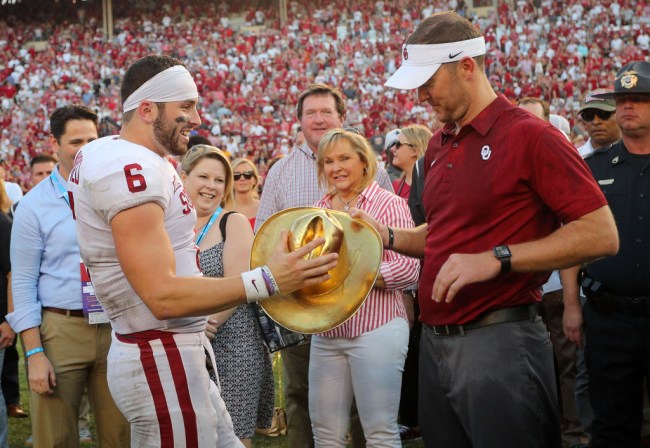 The Cleveland Browns might have technically been the favorite heading into last night’s game against the Jets but they still managed to shock the world when they finally put an end to their 19-game losing streak thanks in no small part to a standout performance from Baker Mayfield.

In addition to passing for over 200 yards, Mayfield also showed off his hands game when the Browns channeled their inner Philadelphia Eagles and successfully ran a trick play on a two-point conversion toward the end of the third quarter.

Based on some of the post-game reactions I’ve come across, more than a few fans were very appreciative of Cleveland’s new savior.

Chants of Baker Mayfield from fans leaving the stadium. pic.twitter.com/Ps9vKguCHk

It probably didn’t hurt that he helped treat fans to free beer when the Bud Light Victory Fridges were unlocked following the W.

Baker Mayfield asking if the Bud Light Coolers are open now after Epic Victory for Cleveland.

However, it isn’t just Browns fans who gave the QB major props after the long-awaited win.

During his time at Oklahoma, Mayfield was a fairly controversial player thanks to some of his behavior on the field, like the time he grabbed his crotch while playing the football powerhouse that is Kansas.

Baker Mayfield with the nut grab and some choice words for Kansas players after a TD pass #Sooners pic.twitter.com/mV884aX3SM

He also didn’t do himself any favors during the Rose Bowl, when he antagonized Georgia by taunting them with a throat slash in addition to getting all up in their warmups.

Baker Mayfield warming up right in front of the Georgia tunnel pic.twitter.com/R2BbLn1foI

However, there was nothing more disrespectful than the time he planted an Oklahoma flag in the middle of Ohio State’s field after a win.

Baker Mayfield is a SAVAGE! #OhioStatepic.twitter.com/kk5QJwvPOc

After last night’s win, Lincoln Riley— who coached Mayfield during his time as a Sooner— reacted with the perfect Throwback Thursday post.

If anything, last night’s win was basically Mayfield neuralizing the people of Ohio like Agent J and convincing them he’s not such a bad guy after all.

I’m sure most people are now more than willing to forgive and forget.