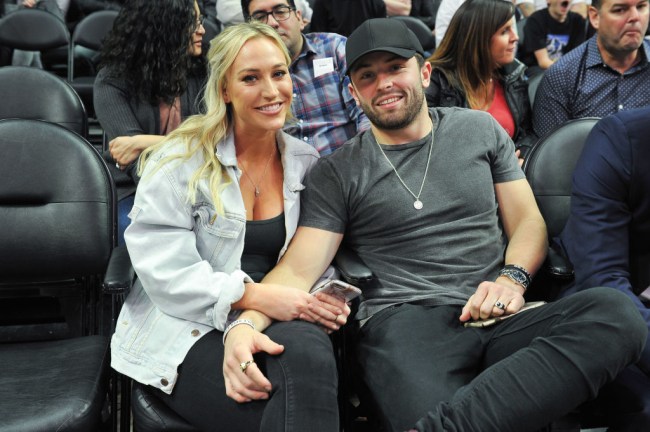 There was once a time when finding a romantic partner involved having your parents figure out which prospective mate would result in you being bestowed with a nice tract of land or some social capital, and while I’m sure there are some people who still meet their significant other in that way, things have changed a bit since the 21st century rolled around.

Nowadays, the internet is the place to be if you’re looking to find a hookup in both the short and long-term and there are countless websites and apps in existence designed to help you link up with a suitable partner, whether we’re talking about eHarmony, Tinder, or Farmers Only.

However, sometimes you find love in more unexpected (and untraditional) places and have to figure out a way to make your dream a reality, which is exactly what Baker Mayfield was forced to do when he was first introduced to Emily Wilkinson, who he married earlier this month.

I love you with every ounce of my being and I’ll always feel like the luckiest girl in the world. Happy “Kobe Year” my love…. cheers to another year of adventure!♥️ #24

In a recent ESPN profile, we learned Wilkinson landed on Mayfield’s radar a couple of years ago, and while she rebuffed his advances at first, he wasn’t going to let that stop him from trying to slide into her DMs.

Unfortunately, he failed to get a followback at first and was instead forced to shoot his shot and resort to a tried-and-true strategy harnessed by countless people trying to increase their number of followers before ultimately prevailing in his quest:

The quarterback and his fiancée, who is from Nebraska, were introduced in 2017 by a mutual friend. At the time, Wilkinson was living in Los Angeles. She says she was wary of dating a “punk football player” and ignored Mayfield’s advances for months.

He repeatedly followed and unfollowed her on Instagram, trying to attract her attention. Finally, in late December, they exchanged messages. He begged her to meet him before the Rose Bowl, his final college football game. She reluctantly agreed to grab lunch.

If you needed any motivation to shoot your shot today, Mayfield just gave you a great reason to do so.