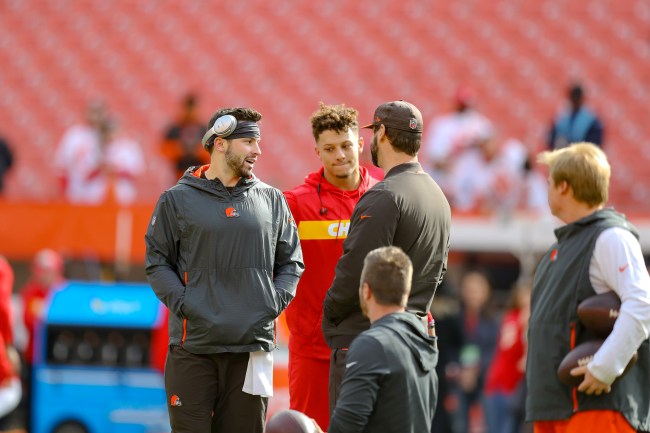 Baker Mayfield showed out on Sunday night in front of a national TV audience against the Pittsburgh Steelers, throwing for 263 yards and tossing three touchdown passes as his Browns embarrassed their AFC North division rival. It was the former No. 1 overall pick’s first ever NFL Playoff game, so I’m here to make a major announcement: Mayfield’s about to become the next Tom Brady and become a postseason god!

OK, so that might be a stretch, but as a diehard Browns fan and proud member of the Dawg Pound, why the hell shouldn’t I feel that confident? Keep doubting us, haters, because it’s Cleveland vs. The World — and we love it that way. Let’s. Go!

Now, most of you will probably remind me that the Browns have quite the matchup this weekend, set to take on the No. 1-seeded Kansas City Chiefs in Arrowhead. You know, the same Chiefs that won the Super Bowl last season. The team with Patrick Mahomes, Travis Kelce, Tyreek Hill and others. The Chiefs that can score touchdowns in the blink of an eye. Who cares, because it’s Baker Mayfield’s time right now, and analytics is bringing me a sense of confidence about Cleveland’s chances a few days before kickoff.

According to Pro Football Focus, since Week 9 of the NFL season, Mayfield has a higher quarterback grade than Mahomes. If that doesn’t make my fellow Browns fans sleep better at night, what the hell can?

Of course, there’s a lot that goes into a stat like this — like opponent, offensive strategy, etc. — but, hey, numbers don’t lie, so I’ll happily take the little win here and hope that Baker and the Browns can outplay Mahomes and the Chiefs Sunday afternoon in the NFL Playoffs.

But because haters love to hate, there aren’t too many people on Twitter who share my optimism or confidence after seeing PFF’s little stat. Just take a look at some of the replies from people after they saw the whole analytics thing.

Losses to the Jets:

Baker’s schedule since week 9 is a real murderer’s row. Get all the way out of here

Indeed. Baker isnt a franchise QB. He is Just a decent starter

I would take Mahomes' averages over Baker's during that time frame.

That must be why the Chiefs are only 9.5 point favorites. QB play. I got it #RunItBack

OK, so maybe Baker Mayfield has benefitted from a softer schedule and the luxury of managing games, but who gives a damn, because stats are stats, so Chiefs fans should be scared AF about a confident Cleveland team rolling into town on Sunday… I think? Then again, these could be the same old Browns and get blown out by 30. Would anybody be shocked? Probably not.

Then again, don’t forget that Mayfield bested Mahomes in their only collegiate matchup when he was Oklahoma and the latter was at Texas Tech, 66-59, with both putting up video game like numbers on their way to an offensive shootout that was a joy to watch. Like, seriously, look at these stats from both quarterbacks during that contest.

When these guys played in college it was a fireworks show. Sunday should be awesome! #Browns pic.twitter.com/pJUvp8mfFL

Sure, that probably won’t happen in the NFL Playoffs this weekend, but wouldn’t it be dope if it did? More importantly, for all my fellow Browns fans, wouldn’t it be awesome to see Baker Mayfield outplay Patrick Mahomes and, you know, actually lead Cleveland to the upset win? Yeah, that’s what we all want most.