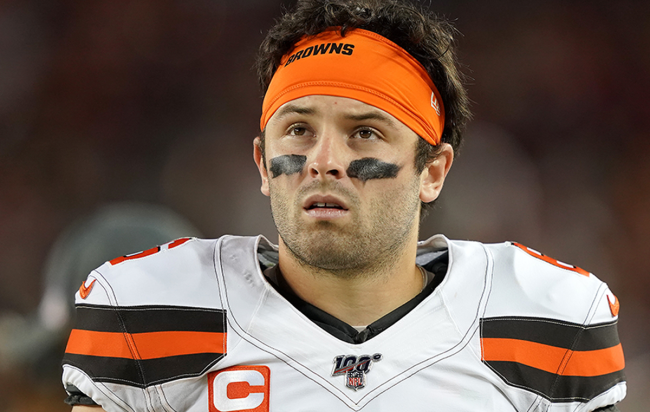 In the 1950s, the United States Air Force really let its creative juices flow when it dreamed up the term “unidentified flying object” to describe objects it observed flying but was unable to identify. While it was originally coined to refer to any type of craft that left people scratching their heads upon spotting them in the sky, there’s really only one thing that comes to mind when most people hear the term “UFO” nowadays: the influential English rock band that was formed in London in the late 1960s.

You might also associate UFOs with the extraterrestrial beings who’ve apparently decided the Earth is a pretty happening vacation spot based on how many people have claimed they’ve spotted an alien spacecraft in the sky—including Baker Mayfield, who appears to have joined the ranks of those who believe Special Agent Fox Mulder was on to something.

Mayfield has been spending some time in his native Texas after leading the Browns to the playoffs for the first time since 2002, and on Wednesday night, he and his wife Emily were driving back from dinner near his childhood home of Lake Travis when they both spotted a “very bright ball of light” plummeting out of the sky.

Emily also hopped on Twitter to confirm she saw the same thing, saying she’s a UFO skeptic but apparently still someone shook by what she witnessed.

I won’t lie… I’m typically not someone who buys into UFO talk. But all I know is… I saw something tonight that I have never seen. And I’m a little thrown off.

A number of internet sleuths quickly hopped on the case in an attempt to track down a logical explanation for the sighting, as it appeared there was a chance Mayfield could’ve spotted one of the objects that were launched by multiple organizations that conducted test flights on Wednesday—including SpaceX, which had an SN10 Starship make a trip that ended with the prototype exploding in spectacular fashion after landing around 370 miles away from Austin.

However, that occurred hours before the Mayfields spotted the mysterious light streaking across the sky, so as of right now, it would appear they’re technically not wrong when they say they saw a UFO.

Baker is lucky he’s in the Austin area, as he’ll have no shortage of resources he can turn to in an attempt to help him get to the bottom of this mystery. I’m sure Joe Rogan would be more than happy to have him come to his absurd podcast studio to talk about the incident, and if that doesn’t work out, there’s always Alex Jones.