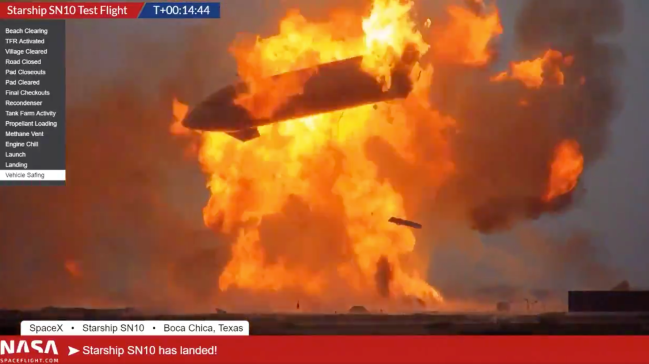 SpaceX successfully launched and landed its SN10 Starship test vehicle on Wednesday, but not without a massive explosion. The Starship lifted off around 6:15 p.m. EST and touched down about five minutes later. Video of the landing is pretty unbelievable, showing the vehicle flip from horizontal to vertical and slowly lower to the ground. It looks like CGI, but it’s not.

Three Raptor engines propelled the Starship about six miles into the air before each engine shut down one by one and the descent begins. However, as you can see, there are small fires at the base of the vehicle and it has a pretty significant lean when it nears the ground and touches down. The flames continued and, roughly 10 minutes later, the entire Starship exploded in a colossal ball of fire from what is believed to be a possible methane leak.

Elon Musk’s company has been producing Starship test vehicles at its facility in Boca Chica, Texas with hopes of eventual interplanetary transportation. Two previous prototype test flights also ended in fiery explosions, but SN10 was the first to successfully take off and land— the other two didn’t get that far.

The first test resulted in a crash landing after the rocket failed to slow down enough, and the second saw a similar fate after an engine did not properly ignite, causing the rocket to land at an angle and crash. SN11 is already in Texas and will attempt to be the first rocket with success from start to finish.

Here is the full video of the launch, it really is hard to believe that it’s real: