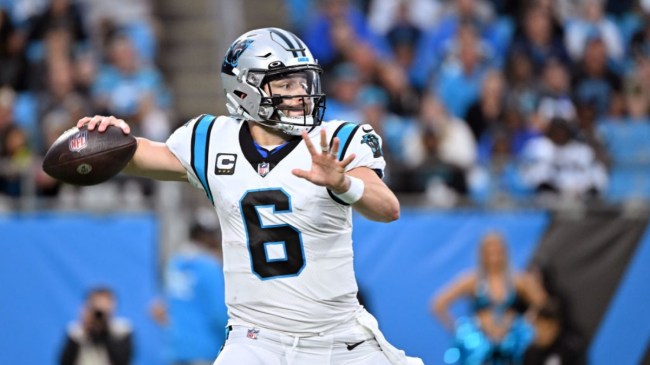 The trade for Baker Mayfield has not paid off for the Carolina Panthers like they would have expected. The addition of Baker was expected to improve the team, but after 4 games, they find themselves with just 1 win.

To make the situation worse, they find themselves struggling on the offensive side of the ball even with their new quarterback. The Panthers have yet to score more than 24 points in a week this season and have twice been held under 20.

The worst performance yet came this weekend in a loss to the Arizona Cardinals. The Panthers only mustered 16 points against a Cardinals team that had not yet held a team under 20. Only 9 of those 16 points actually came from the offense as a pick-6 was responsible for their first touchdown of the game.

The game also saw Baker throw 2 interceptions and lose a fumble, leading directly to 10 points for the Cardinals. One of those interceptions came as the result of JJ Watt tipping a pass from Baker at the line of scrimmage.

It was one of a few throws from Baker that was tipped by the defensive line, leading a reporter to ask him why he doesn’t do any drills to prevent balls being batted.

Baker was not happy about the question and suggested that the reporter let him know if they had a drill for him.

Baker Mayfield was not happy with question about batted balls

Baker Mayfield is asked why he doesn’t do drills to prevent batted balls.
Baker: “If you have a drill for me let me know.”#Panthers pic.twitter.com/XwqP38EP9D

Batted balls are really just one of the many issues facing the Carolina Panthers’ offense right now. A much bigger problem is Baker’s inability to get the ball to DJ Moore, the team’s best receiver.

Through 4 weeks, he has just 13 catches and 6 of those came against the Cardinals. Those 13 catches have led to only 138 yards for a player that has topped 1150 yards in each of the last 3 seasons.

The Panthers really need to get that sorted out before anybody starts worrying about batted ball drills.