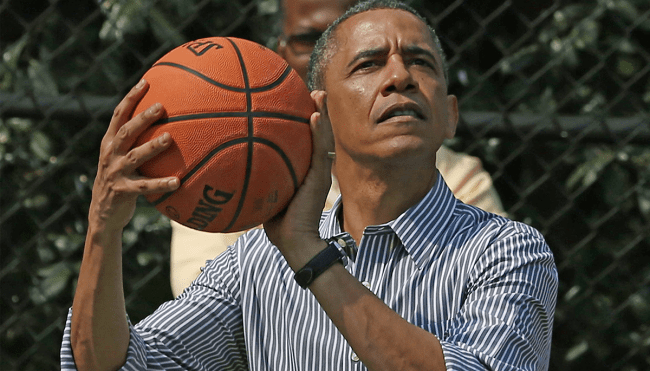 By most accounts, being the President of the United States is a fairly busy job, but that didn’t stop Barack Obama from kicking off his day with an early morning workout six days a week during his time in the Oval Office.

Obama turned to a variety of activities to stay in shape while he was Commander in Chief, including the pickup basketball games he routinely hosted around the Washington, D.C. area. He was apparently no slouch when was a member of the high school team that secured a Hawaiian state championship during his senior year, and while he eventually turned his attention to other ventures, he never lost his love of the game.

The former president normally recruited former college players to join him on the court at the White House and Camp David, but as he recently recounted on the Armchair Expert podcast, he decided to spice things up a bit when his 49th birthday rolled around.

On August 4th, 2010, a crew of current and former NBA stars descended on Fort McNair to join Obama. It was an absolutely stacked squad that included Lebron James, Derrick Rose, and Dwyane Wade as well as Bill Russell and Magic Johnson, who all spent a couple of hours participating in the tournament that was organized.

While the event was covered by the press at the time, members of the media weren’t allowed to watch what unfolded inside the gym. Thankfully, Obama provided some insight while recalling what went down while chatting with Dax Shepard and Monica Padman:

“One of the perks of being president is you can invite people to the White House and they show up.

For my 49th birthday, we had an All-Star Game that was just kind of for us. LeBron came. Dwyane Wade, and Derrick Rose; all these amazing NBA players. Each team had three NBA players and two amateurs. All my high school friends came over. We had this round-robin tournament, and we had Wounded Warriors who we invited to watch; we signed autographs and gave shoes away afterward.

Having LeBron suddenly guard you–this mountain of a human–you never feel so small and weak. When he’s picking you up full court, you just pass the ball or hand it to him and say, ‘Here, I’m not worthy.’”

He may have been intimidated by James at the time, but Obama earned his praise last year when he proved he can still drill a three with ease while campaigning for Joe Biden.

That’s one hell of a birthday celebration.