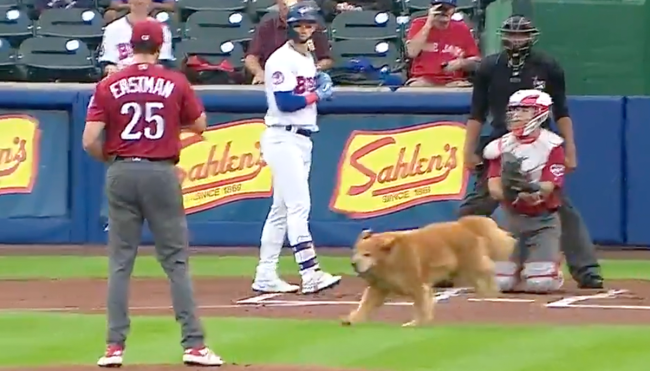 It’s not a secret that minor league baseball teams aren’t exactly the most lucrative business endeavor on the planet, and while the players that take the field are technically the product, the marketing department tasked with dreaming up ways to lure in fans to watch them is arguably a franchise’s most valuable asset.

Over the years, minor league baseball teams have attempted to drum up hype by hosting nostalgia-inspired theme nights, selling some particularly intriguing concessions items, and giving a roster spot to a retired NFL quarterback who has no real business being on the diamond. However, none of those have anything on a simply delightful publicity stunt that has made the world a better place to inhabit: bat dogs.

The humans traditionally tasked with retrieving equipment (and the world’s most heartless umpire) may not be a fan of the canines who’ve found employment as a bat dog, but you’d be hard-pressed to find many people who view the addition of these very good employees as a downgrade.

In 2018, a golden retriever named Rookie debuted as the bat dog for the Trenton Thunder, but on Wednesday, he swapped dugouts by offering his services to the Buffalo Bisons during the team’s contest against the Lehigh Valley IronPigs.

🐶 @BatdogRookie has arrived! Big addition to the Herd lineup as we open up a 5-game homestand vs. Lehigh Valley with a stops Dog Day at the Park! pic.twitter.com/5nBMsylP0C

I made it up to Buffalo to see my frens with @BuffaloBisons. The walkway to the dugout is really nice. pic.twitter.com/DJ3VnBabnH

Unfortunately, Rookie’s stint in Buffalo got off to a bit of a rocky start, as the game was briefly delayed in the bottom of the first inning when he decided to take a quick trip around the infield in the middle of an at-bat.

.@BatdogRookie got a little excited during his Sahlen Field debut with the @BuffaloBisons 🤣

However, Rookie managed to bounce back and spent the rest of the game doing what he does best.