This Mullet Sporting, Suit Wearing Toddler Has Become The Unofficial Mascot Of The Baylor Bears 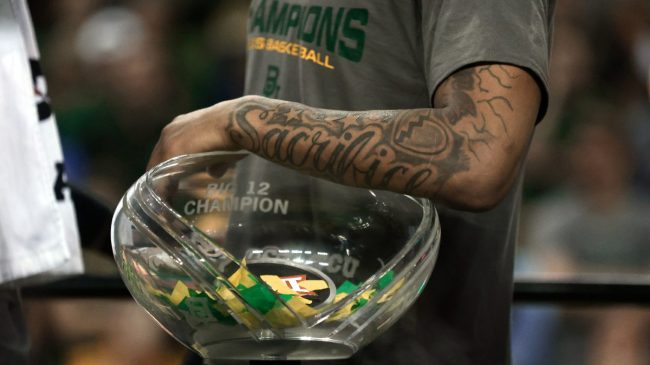 The Baylor Bears won the Big XII regular season title for the second straight season, putting a bow on the championship with a win over Iowa State this past weekend. Now, they’ll look to defend their status as reigning national champions with postseason play set to begin.

The Bears are almost assured a spot as either a No. 1 or No. 2 seed in the upcoming Big Dance, but they can solidify their standing at the top with a run in the Big XII Tournament next week.

Baylor has seen some good fortune this year as noted by an incredible 26-5 overall record, and they’re hoping the ball continues to bounce their way when the postseason begins.

One key factor could be the attendance of this toddler superfan, who’s now being dubbed as the team’s good luck charm.

His name is Bear Bacon and he’s been gaining a ton of recognition on social media this season.

Bear comes to every game decked out in a green suit, yellow tie, and suspenders while sporting an awesome mullet that’s almost too big for the state of Texas.

Little man was on hand to watch his favorite team bring home the Big XII title on Saturday, and he even got a chance to celebrate with the team on the floor afterwards.

Now, he’s already got his sights set on watching the Bears win the Big XII Tournament.

The toddler superfan is perfect for the camera and he’s sure to make another TV appearance at some point before the end of the season.

Follow all of Bear’s Baylor adventures on Instagram (BaylorAndBearBacon) and Tik Tok (@bear_bacon). We’ll see if he can help his team bring home another national championship.