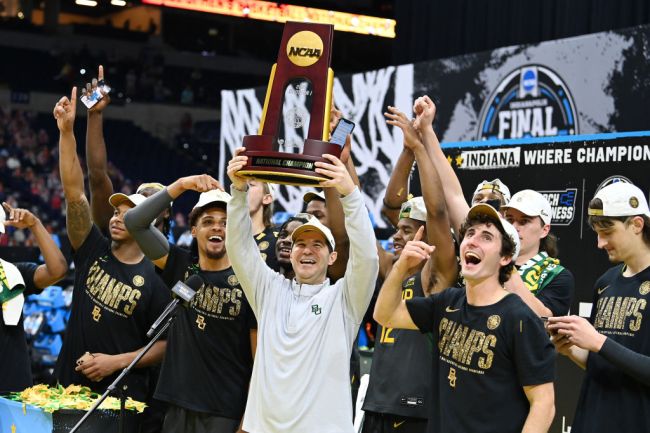 “If you’re going to war and I’m coaching, I’m taking these guys,” said Baylor head coach Scott Drew after winning the school’s first-ever national championship on Monday night. The Bears led the entire game and defeated the Gonzaga Bulldogs 86-70 in the seventh most dominant March Madness victory of all-time. It was a boat race from the opening tip and the 16-point margin sits tied with Baylor’s 1948 national title game loss to Kentucky in terms of blowout victory,

A 50-year old Drew became the youngest active title-winning coach in men’s basketball 17 years after moving to Waco to fill the role. During his 2003 introductory press conference, a 33-year-old took over a program in shambles after a scandal rocked the entire athletic department. It was one of the least desirable positions in Division I coaching, but Drew was up for the task and promised to be a part of a rebuild that was to reach its pinnacle with a NCAA championship.

Baylor’s title is not only the first in school history, but the second-ever from the state of Texas. Texas Western won a ring in 1966, but neither Texas nor Texas Tech, nor any other school in the Lone Star state has won in the final. The Bears were unstoppable on offense and shot 44.8% from the field and 43.5% from beyond the arch. All systems were go from start to finish.

Baylor has its foot on the gas 💥#NationalChampionship @BaylorMBB pic.twitter.com/qLVI3pRTiE

Jared Butler cashed this 3 from the parking lot pic.twitter.com/2AXLsrdP39

It felt like Gonzaga was supposed to go on a few runs late in the first half and early in the second half, but Baylor stayed lights out and never let its opponent back in the game. While the scoring was impressive, it was a physical mismatch all night and it was the Bears defense that won the game.

Gonzaga: we have a high scoring offense

Baylor: we lift with the football team

Jalen Suggs, Drew Timme and Corey Kisbert did not have an answer for the stifling paint presence.

Another look at this HUGE Bears block 🚫@BaylorMBB #NationalChampionship pic.twitter.com/6HkJsWp6KG

Monday’s national championship was the culmination of a bizarre, difficult season, and it finished exactly how it should have. While the result wasn’t close, Gonzaga and Baylor distanced themselves as the two top teams in the country all year long, with the Zags trying to become the first-ever undefeated team to win it all. They were scheduled to play one another in Indianapolis back on December 5th, but it was cancelled due to COVID-19 concerns. The unintentional reschedule took place in the same building, five months later, for all of the marbles— and the best team won, confidently.

Baylor wins the #NationalChampionship for the first time in men’s program history! pic.twitter.com/HOg0RgPN41

Drew made good on his promise.