Bears Fans Are Going To Hate Seeing This Bonkers Stat From Sunday Night Game Vs. Packers 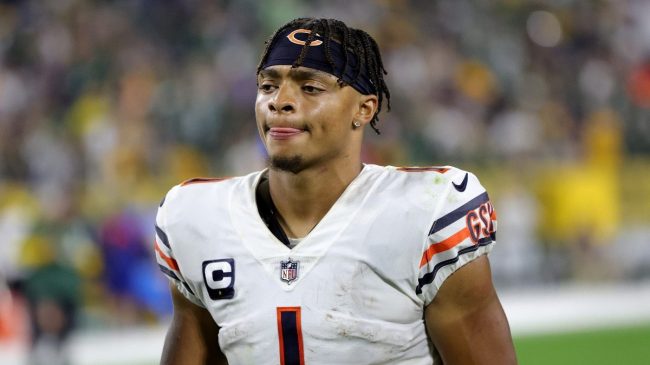 The Chicago Bears offense largely struggled in their Sunday night matchup against the Green Bay Packers. They clearly emphasized running the ball, but it wasn’t enough to get any momentum rolling. Considering Justin Fields has all of the hype in the world, maybe the coaching staff should consider opening up the playbook a bit.

According to Jack Miller, Chicago only threw the ball 11 times. Miller points out that there are only two teams in NFL history who had fewer pass attempts in a single game in a double-digit loss. Kendall Hinton (who wasn’t even a quarterback) and the Denver Broncos in 2020 and David Carr with the Houston Texas in 2005 (Carr only had nine attempts in that game).

Look, we get it that the Bears don’t have the best wide receiver core, but calling run play after run play becomes rather predictable after a while. Who knows what could have happened if the coaching staff called more pass plays? Perhaps Justin Fields could have been able to drive the field more consistently.

Luke Getsy is the offensive coordinator for the Bears. He’s the one calling the plays. So maybe it’s time for head coach Matt Eberflus to take control and have Getsy open up the playbook a tad. It’s not like Fields is a horrendous thrower, as he proved to be dynamite throughout his collegiate career.

At the end of the day, the Bears must get the offense rolling if they hope to compete. They looked good defensively against the Packers on Sunday night. However, the offense must score points. Hopefully, the coaching staff will give Fields more opportunities to throw the ball, otherwise, this is going to be a long year for Chicago.