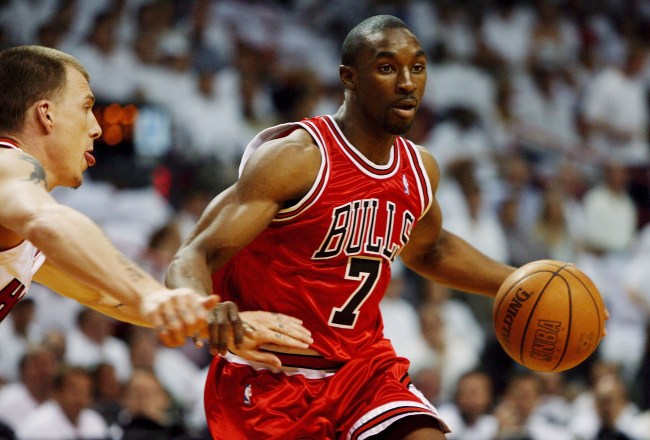 Former NBA guard Ben Gordon began his new Players’ Tribune confessional titled ‘Where Is My Mind?’ writing, “There was a point in time when I thought about killing myself every single day for about six weeks.”

That sentence colored a 3,000-word admission detailing a mental health-fueled downward spiral that resulted in the 11-year NBA player being arrested four times in five months and being strapped down on a mental hospital gurney.

This was right after my last year in the league, and I was living in a brownstone up in Harlem. I had lost my career, my identity, and my family all pretty much simultaneously. I was manic-depressive. I wasn’t eating. I wasn’t sleeping. And when I say I wasn’t sleeping, it was like a whole different level of insomnia. Every night, I’d wake up at the same time, like clockwork. And that’s when the demons would come out. When you’re up all night and it’s quiet and it’s just you alone with your deepest thoughts — that’s when the darkness really starts to take over your whole psyche.

Gordon, who spent averaged 19.6 points per game during 11 NBA seasons, recalled a time when he was near the Williamsburg Bridge in Brooklyn and turned to his friend and said, “Yo, no lie. I think I’m dead.”

"Who was Gentle Ben? Who am I? And that’s when I started disassociating myself completely from Ben Gordon. I was convinced that I was a clone. That this body I’m in is not my real body. It can’t be."

Ben Gordon opens up about his mental health.https://t.co/7A6SWAPpMT

I said, “No, for real. This can’t be my real life anymore. This got to be some type of purgatory shit. Like I’m a dead person, but I’m going through these motions still. Like I’m a dead man walking.”

The 36-year-old said he became “obsessed” with killing himself after experiencing frequent panic attacks that he described feeling like a “black cloak” was thrown on top of him, suffocating his body and soul.

I took one of those heavyweight jump ropes — the thick rubber ones — and I tied it around my neck. Got a chair. And I hung myself, for real.

As blood vessels popped in his head, the former UCONN star loosened the rope by convincing himself, “You don’t really want to kill yourself. You just want to kill this anxiety.”

Basketball was the one avenue where Gordon could channel his rage and obsession, but after his career ended in 2015, he had nowhere to put the “anger and pain and feat and regret” he’d been compartmentalizing all his life.

The term "walking bucket" gets thrown around way too casually these days… but it's true for Ben Gordon.

Dude could get 30 in his sleep | Bulls Mixtape Vol. III pic.twitter.com/nJngCmnWPz

Shortly after Gordon was arrested for pulling all the fire alarms in his Astoria apartment complex when he was locked out, he describes an incident that “broke” him.

It got so bad that they had me committed to a mental hospital, and the problem was that I didn’t even understand why it was happening. It was like in the movies. I’m in some white room, and I got doctors and nurses strapping me down on a bed. They got the scrubs on and the gloves on, and they’re sticking needles in my arms, and cutting my pants off at the waist.

Gordon soon began thinking he was two different people, Gentle Ben, the person he strived to be, and this other guy with wild hair who was acting out.

And that’s when I started disassociating myself completely from Ben Gordon. I was convinced that I was a clone. That this body I’m in is not my real body. It can’t be. My spirit is trapped inside this clone body that’s bugging right now.

In conjunction with Gordon’s fourth arrest, a judge ordered him to do 18 months of therapy, which ultimately saved his life.

It helped me work some things out. But more than anything, I think it helped me embrace the fact that — it’s like, Yo, B, you’re different. And that’s alright. You don’t have to be perfect. Those habits that got you to the league? They don’t translate to real life.

The goal doesn’t have to be perfection. It can just be peace and acceptance with yourself.

Check out the entire piece over at the Players’ Tribune.