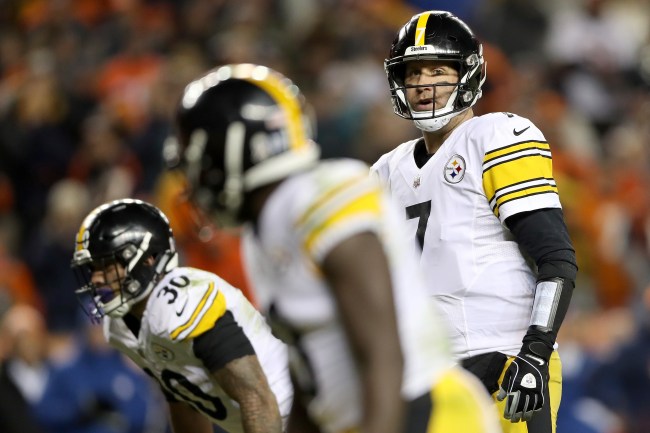 I don’t know much about Ben Roethlisberger other than the fact that a) I remember seeing him on High Street at Miami (OH) when my older sister went there, b) he has won two Super Bowls and is a definite Hall of Famer and c) he has completely dominated my Cleveland Browns ever since coming into the league in 2004. Other than that, though, I don’t really have an opinion of the Pittsburgh Steelers quarterback.

Well, other than that he kind of seems like a prick of a teammate.

Look, I’m sure Roethlisberger expects the other guys in his locker room to hold themselves to a high standard, but there’s a way to go about it that Big Ben seemed to ignore earlier this week when he openly called out rookie wide receiver James Washington following his team’s loss to the Denver Broncos this past weekend. Whether warranted or not, it was Ben Roethlisberger who threw that pathetic interception in the waning moments of that game which cost his team a potential victory, no one else. Just sayin’.

While I’m all for guys privately calling out teammates for not doing what they’re supposed to be doing, when it gets done in front of the media, it doesn’t do anything but harm for a team. But, according to Ben Roethlisberger, he doesn’t care about anyone’s feelings, because, in his own words, he’s “earned the right” to throw teammates under the bus. Just look at what he said today, via the Pittsburgh Tribune-Review, via FTW.USAToday.

“I think I have earned the right to be able to do that with as long as I have been here, and I’ll just be just as critical of myself [in the media], as well.”

“Being around for a long time with a lot of different players,” Roethlisberger said. “You have to know how to motivate different guys in different ways. I think that’s part of being a leader, being a captain, just understanding players. Sometimes you just grab them off to the side, and sometimes you have to be honest with them.”

Oh captain, my captain, Ben Roethlisberger is the leader of this ship, so you either handle the heat of get the hell out of his kitchen.

Need another instance where Big Ben threw a teammate under the bus? How about that aforementioned interception in the end zone towards the end of the Broncos game, where he even called out stud wideout Antonio Brown, per FTW.USAToday:

“This was a … play where I’m reading the safety to the weakside where AB is, and if the safety comes down and takes away the run, I pull the ball back and throw the ball to Antonio, who is supposed to be running a real flat, down-the-line kind of route … [The cornerback] did undercut AB … that’s where I talked to AB, like ‘AB you have to come flat. You can’t drift in the end zone or those undercuts happen.’”

Keep doing you, Ben Roethlisberger, because we know it’s never, ever, under any circumstance your fault. After all, you’re not the quarterback who’s actually throwing the ball or anything.