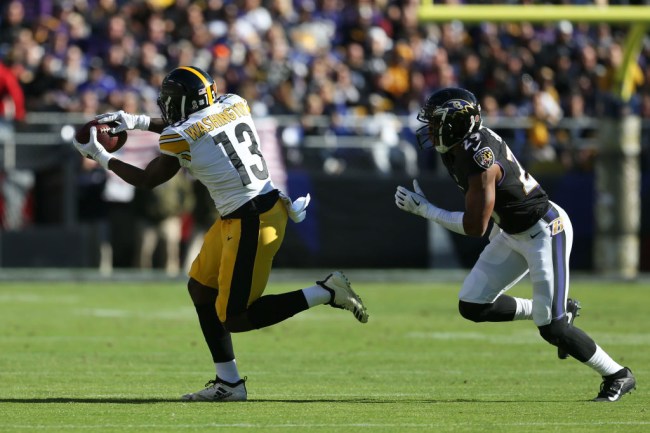 Steelers rookie wide receiver James Washington seems to have struggled with confidence all season. The Oklahoma State product and Pittsburgh’s second-round pick has caught just eight of 25 targets, a 32-percent rate that is the lowest among NFL receivers with at least 11 targets, reports TribLive.

James Washington has a catch percentage of 32%.

JuJu his rookie year had a 73.4% catch percentage.

Not every ball is 100% catchable but when 25 balls come your way & you only are able to come down with 8… there’s a problem.

In Sunday’s game against the Denver Broncos, Washington was 0 for 3 on passes thrown his way, and the only player of the 10 players that were targeted that didn’t register a catch. The most crucial drop of the game came on second-and-8 from the Steelers 41 with 4:40 left in the third quarter. For some reason, Washington dove for a ball that he could have easily ran underneath, breaking a 17-17 tie.

Would have been INSANE. pic.twitter.com/d8w93oixoc

The sure TD resulted in a punt after Big Ben threw incomplete pass intended for Antonio Brown. The Steelers would go on to lose by a touchdown.

“He has to make it,” Big Ben said Monday during his weekly appearance on 93.7 The Fan. “I just think he didn’t trust his hands. For some reason, he jump/dove. I’m not really sure what he was doing. We look at it (on film), and coach got on him pretty good yesterday. We took a long, hard look at it. James needs to run through that, and it’s a touchdown.”

The drop contributed to breaking the Steelers six-game winning streak. Washington will have another crack at redemption against the Chargers on Sunday.