Ben Simmons Discusses His Desire To Return For The Nets Amid Physical, Mental Hurdles 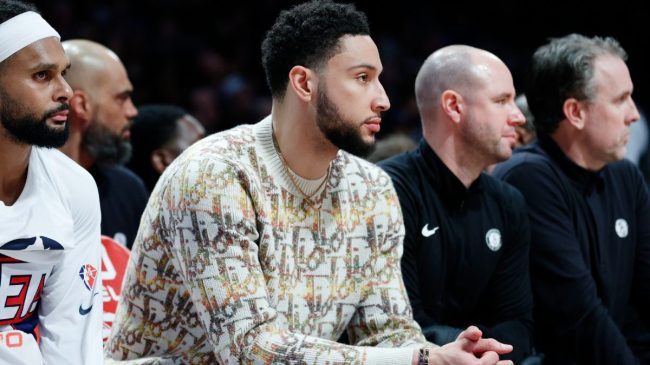 The Brooklyn Nets will be without star forward Ben Simmons as they look to avoid an opening round sweep in the NBA playoffs.

Simmons hasn’t stepped foot on the court all season while splitting time with the 76ers and Nets. He’s cited both physical and mental setbacks dating back to his time in Philly for his continued absence from the floor.

Earlier this year, the former first round pick made it clear that he no longer wanted to be in Philadelphia, which led to his midseason trade to Brooklyn. The Nets had hopes of their new addition making his debut in this opening playoff series, but it seems that we’ll have to wait a bit longer for a return.

Many have grown frustrated with news that his presence on the sidelines will extended, but it appears that Simmons is still insistent on his plans to play for the Nets (whenever that may be).

NBA insider Adrian Wojnarowski stated ahead of Monday’s playoff matchup that Simmons met with Nets’ brass to discuss his role moving forward. That includes how he and the team can work together to get over both “physical and mental hurdles” necessary to make his return to the court.

ESPN Sources: Ben Simmons and CEO of Klutch Sports Rich Paul met with GM Sean Marks and Nets leadership today to discuss how they’ll continue to work through the physical and mental hurdles needed to get Simmons back on the court.

Wojnarowski goes on to say that Simmons’s desire to play for the Nets hasn’t changed. He reportedly had a solid two weeks of practice heading into the weekend but on Sunday, he realized “there are still mental and physical hurdles that need addressing” before suiting up.

Simmons reiterated desire to play for Nets and sides talked on how they’ll work together to try and get there. Both groups believe Simmons had two good weeks of physical ramp-up thru Sunday, but ultimately realized there are still mental and physical hurdles that need addressing.

Wojnarowski closes by saying that Brooklyn believes that Simmons has been doing what he can to address both areas, but that there’s still more work to do. Once those obstacles are cleared, a return to action could happen.

The Nets believe Simmons has been addressing both mental and physical areas in recent months, and recognize there’s more work to do. Nets meet Celtics in Game 4 tonight in Brooklyn, trailing series 3-0.

The Nets need to get through Game 4 of the series in order to keep their season alive. If they can do that, maybe there will be a chance we see Simmons return to the court this postseason.