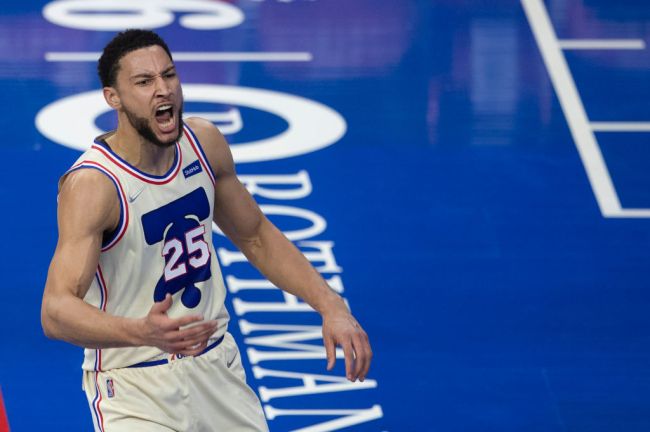 Ben Simmons is so done.

Simmons is currently treating the only NBA team he’s ever known like a college freshman who’s anchored against his will to his high school girlfriend.

After not communicating with the team since late-August, the three-time NBA All Star will not report to the opening of training camp next week and intends to never play another game for the franchise, sources told ESPN.

Simmons’ evident disdain in the Sixers has many tentacles. The franchise signed off on a Simmons-for-Harden trade last season that never materialized, which rightfully irked Simmons. Then there was coach Doc Rivers throwing Simmons under the bus after getting booted in the playoffs no thanks to mind-numbing stats like these:

Ben Simmons is 0-0 FG in the 4th quarter of the last 4 games. pic.twitter.com/R6PcUkCqIR

Sprinkle in the insurmountable lengths the 25-year-old will need to go to endear himself back with Philly fans, and it’d be totally understandable if Simmons signs a veteran’s minimum with the Shanghai Sharks.

Ben Simmons is the biggest loser in Philadelphia sports history

His ghosting won’t come without a price, a hefty one for 99.99% of the world.

According to Woj, Simmons is “clearly aware of sanctions available to organization to fine and suspend him, including withholding of salary.”

Those sanctions: Up to $227,000 for each missed practice, totaling $1.3 million if he misses training camp and pre-season, a price tag his side is reportedly willing to swallow, according to ESPN’s Brian Windhorst.

Two hundred and twenty seven thousand dollars PER DAY, that amounts to nearly 3.5x the median household income in America ($67,521 in 2020). A drop in a bucket for a guy who’s still got $147 million remaining on his contract.

Simmons would probably forgo a lot more than $1.3 million to make the city of Philadelphia forget about last season’s playoffs. Money comes and goes. The internet doesn’t forget.

Do not trade Ben Simmons. Let him set out 4 full seasons of basketball and fine him to the fullest everyday he isn’t there.

If you ever feel useless, remember that Ben Simmons wears a shooting sleeve pic.twitter.com/Ncfse5mcK4

76ers: "You coming to training camp?"

Sixers front office : make two free throws in a row and we’ll trade you to any team rn . Miss any and you stay