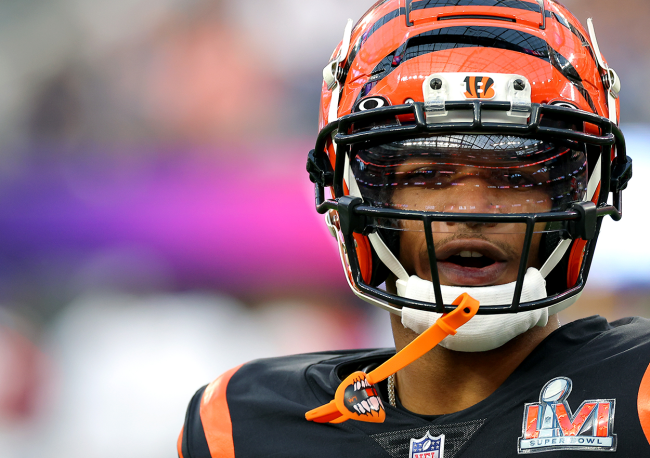 There were a lot of naysayers who said that the Bengals should have drafted a tackle instead of Ja’Marr Chase with the No. 5 overall pick in the 2021 NFL Draft. They are awfully silent now.

Chase, who won the Biletnikoff Award in 2019, was named the NFL Offensive Rookie of the Year after an incredible first year in the league. The former LSU Tiger caught 81 passes for 1,455 yards and 13 touchdowns, setting rookie records for single-year and single-game receiving yards en route to the Super Bowl.

While Chase was all over the field for Cincinnati in 2021, it sounds like he will be even more involved in the Bengals offense in 2022. He is going to do it all.

After practice on Tuesday, wide receivers coach Troy Walters said that the team plans to use Chase in multiple roles as both a pass-catcher and ball-carrier. It is becoming increasingly popular in the NFL to give the best players the ball as often as possible, even out of the backfield.

Take Deebo Samuel for example. He coined the term ‘Wide Back’ last season.

Although it is unlikely that Chase will see nearly as many touches as a rusher this fall as Samuel did a year ago, the team plans to use him out of the backfield a lot more. It also plans to move him from the outside to the slot on various occasions throughout the year.

Ja’Marr Chase has a new role in the Bengals offense.

“He’s going to be all over the field,” said Walters. “We’re going to use him as many ways as we can. He’s a quick learner … That’s what great players want to do. They want to play everywhere. They understand the value of moving around and how you stress defenses sometimes in the slot. You don’t want defenses to focus on you. He’s embraced that challenge. Just find a way to create mismatches.”

Chase also spoke about his new role and he sounds excited about the extra wrinkle it could bring to Cincinnati’s offense.

“It’s going to make our offense more explosive,” Chase said of playing inside more often. “If we sit in there like robots and stay in the same position, they’re going to expect what’s coming. That’s why you move around.”

The change has been an adjustment for Chase, but he thinks that he actually has more room on the inside than he does on the outside.

“It gives me more space to get open. The majority of the time the middle of the field is open and you get matched up on a linebacker or safety,” he said. “If I’m inside, I’ve got to adjust to different techniques of the nickel, the safety, the linebacker, knowing when I need to cross his face, knowing when not to.”

Mike Hilton, who is the NFL’s best slot cornerback, also talked about Chase’s movement from a defensive perspective.

“They’ve got him in the slot a lot more now,” he said. “His tape speaks for itself. Teams are going to be game planning him, double teaming him and the offense is going to find a way to get it to one of their playmakers. He’s doing well. He’s not thinking too much, he’s just being himself I’m excited to see him in there.

“You cut off a lot more of your space. There are a lot more people in there. Safeties, linebackers, you have to worry about a lot more bodies. The best thing a slot receiver does is find the empty zones. You have to be a real good route runner. Learn how to read the zone on the fly and find a spot.”

The plan in Cincinnati is to give Chase the best opportunity to succeed and to keep the defense on its toes. We saw last year that when Chase has the ball in his hands, good things happen— so it seems like a good idea, but only time will tell.