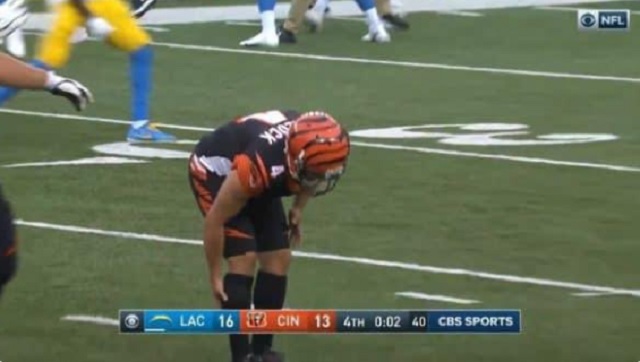 The Cincinnati Bengals suffered their first heartbreaking loss of the season on Sunday and fans are not happy with kicker Randy Bullock.

On the final play of the Chargers-Bengals game, Bullock missed a potential game-winning chip shot field goal from 31 yards out.

Some unreal endings today. First in Detroit and now in Cincinnati. Randy Bullock missed a 31-yard game-tying FG and the #Chargers hold on to win 16-13. pic.twitter.com/EVif8xocNH

Bullock, who was seen holding his leg after the play, claimed that his left calf cramped up as he was kicked the ball which caused him to miss the field goal.

Randy Bullock steps on our postgame Zoom: "For whatever reason during the kicking motion my left calf grabbed real hard. No excuse … It was a freak deal. I let the team down and I'm real frustrated and disappointed."

Bengals fans aren’t buying Bullock’s excuse considering he was holding his right leg in the video of the play and not his left leg as he claims.

But he grabbing his right one get him outta here pic.twitter.com/0PYjtXVbMg

Randy Bullock just admitted his LEFT calf flared up during the kick…what calf is he holding here??…so not only did he miss a CHIP SHOT but he FAKED THE CALF INJURY! Adam Vinatieri the 🐐 is sitting on the couch right now, he might not have 50 anymore but he’s got 40 and in… pic.twitter.com/Eq3YibH8yU

It’s going to be a long season for Bengals fans if the team continues to find new ways to lose games.