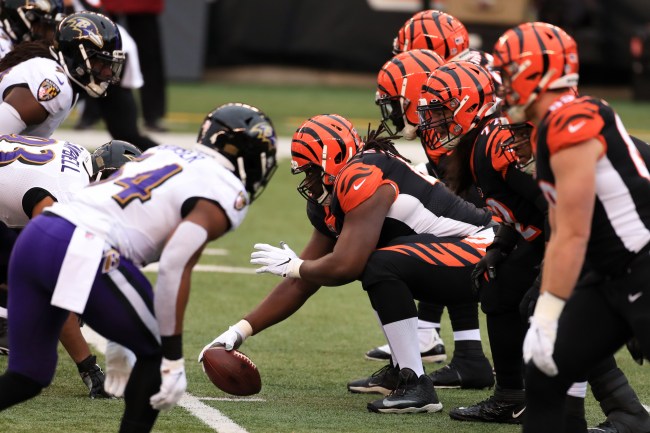 Don’t get me wrong, a uniform unveiling gets my blood pumping and my loins sweaty with the best of ’em, but don’t piss on my head and tell me it’s raining.

I was more shocked to learn that Cincinnati has two n’s and only one t than I was upon seeing the Bengals’ “first major uniform change in 17 years,” a result of a “multi-year process” with Nike.

“Can I copy your homework?”

“Yeah just change it up a bit so it doesn’t look obvious.” https://t.co/aUdzLl4sLo

Full disclosure: historically, I haven’t watched too many Bengals games if I don’t have a firearm aimed at my temple, but I do know that a Spielberg-esque video production starring Chad Johnson doesn’t warrant a few altered shoulder stripes and permanent installment of the Nike Color Rush unis that we’ve already seen.

A new look for a new era. Uniting our past with our future. https://t.co/HEDSzVBLdI @Tide | #NewStripes pic.twitter.com/uM7HMwAs7K

Here’s a written description of the via WLTW that was plucked from the Bengals site:

The New Stripes collection includes white, black and orange jerseys with three styles of pants. The stripe pattern on the shoulders of the jerseys was simplified to create a bold design in addition to the removal of the color blocks.

The design features “Bengals” written across the chest, while the legacy of Paul Brown, the team’s founder and first head coach and general manager, is honored with a subtle signature detail inside the back neck of the jersey.

Me looking for the difference in the new Bengals uniforms. pic.twitter.com/w5fJlatmnn

“We observed real-life Bengal tigers in motion and redrew the uniform’s stripes to mirror the tiger’s movements while stalking its prey,” according to Nike. “The result is a faster on-field expression for one of the league’s most distinctive uniforms.”

A multi-year process with Nike and some dude on Twitter put together a cleaner look in 15 minutes. The white on white is pure sex and requires no stalking of real-life tigers.

The Bengals' new white uniform would be even cooler with a white helmet pic.twitter.com/tXBRJPlqxQ

Why am I upset over this again? I’m going through some shit.