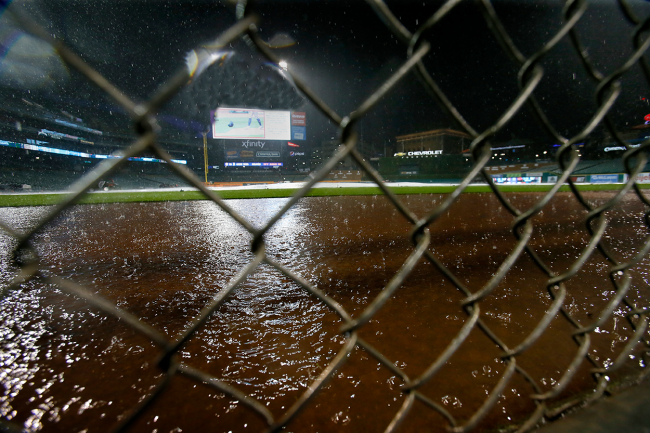 Earlier this week, Bergenfield High School baseball had an unreal scene unfold as they tried to get in one of their midweek games. Things got incredibly dangerous when the New Jersey wind and rain started to roll in and the roof flew off.

On Thursday afternoon, the Bears traveled 27 minutes up the road to Ramsey, New Jersey for a conference game against the Ramsey High School Rams. They were able to get through a few innings before weather rolled in and put what was supposed to be a temporary pause on the game.

After the game was called, both teams retreated to different facilities to avoid the rain. Bergenfield went into some sort of storage facility when the weather took over and created a terrifying situation.

In a video that has since gone viral, one of the Bears players, Marlin, captured the moment on camera. At first, he shows the strong winds blowing dirt and dust at high volumes and velocities.

And then, as he turns the camera back toward his teammates, who were hiding from the weather, the facility started to lose the battle against the wind. The wind caused the roof to start flapping, sent all kinds of objects flying off of the shelves and onto the floor.

Players tried to duck for cover and one of Marlin’s teammates narrowly avoided getting crushed by a large wooden plank. Take a look:

In the middle of a game, jersey weather sum else fr

Fortunately, everyone was okay. Weather is wild.