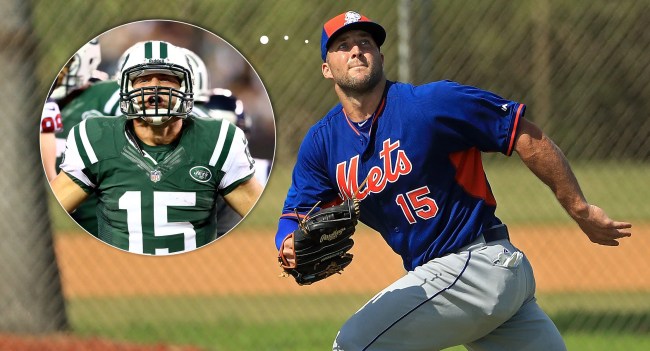 It’s official. 33-year-old Tim Tebow, who has spent the past nine years working as a college football analyst and playing outfield in the New York Mets organization, is now a member of the Jacksonville Jaguars.

Tebow is expected to begin practicing with the Jaguars beginning on Thursday, the first time he will have worked with an NFL team since being cut by the Patriots in 2013 and the Eagles in 2015. The team officially begins OTA workouts on Monday.

“I want to thank the Jaguars for the opportunity to compete and earn the chance to be part of this team,” Tebow said in a statement regarding his signing with Jacksonville. “I know it will be a challenge, but it is a challenge I embrace. I am dedicated to taking the direction of our coaching staff and learning from my teammates. I appreciate everyone’s support as I embark on this new journey.”

Unlike his previous stint in the NFL, the 6-foot-3, 345 pound Tebow is planning to play as a tight end and not a quarterback.

According to Pro Football Focus, Tebow has run 16 routes in the NFL, been targeted twice, and has zero receptions.

He will be competing with Tyler Davis, Ben Ellefson, Luke Farrell, Chris Manhertz and James O’Shaughnessy at tight end for the Jaguars.

His new coach on the Jags, Urban Meyer, also coached Tebow during his college football career at the University of Florida where Tebow won the 2007 Heisman Trophy.

Last week, Meyer told Cris Collinsworth’s PFF Podcast, “There’s a thought going around. He was in the best shape of his life, asked to see if he could work out with a couple of our coaches. I wasn’t even there. They came back to me and said, ‘Wow, this guy’s in incredible shape.’ Then I went another time and watched them try him out. And they said go work on these things, he comes back later. They try him out again, I’m not there, they come in and they said, ‘Wow, this guy’s ball skills, he’s a great athlete, he looks like he’s 18 years old, not 20, whatever he is, 33. I said, ‘Guys you don’t understand, now this guy is, he’s the most competitive maniac you’re ever gonna talk to and let’s give it a shot.'”

Reactions to the signing of Tebow by the Jaguars on social media have thus far been predictably negative and/or humorous.

finally jags get their QB

If anyone wants tickets to Jags games hit my line

You can't spell TEbow without TE

Jags are undefeated since signing Tebow...

It’s a big deal because it invalidates any argument used as a reason against Kaepernick. “He hasn’t played in years”, “He wasn’t very good”, “He’d bring too much of a media circus for a back up”. We all knew those were BS excuses, but Tebow proves it