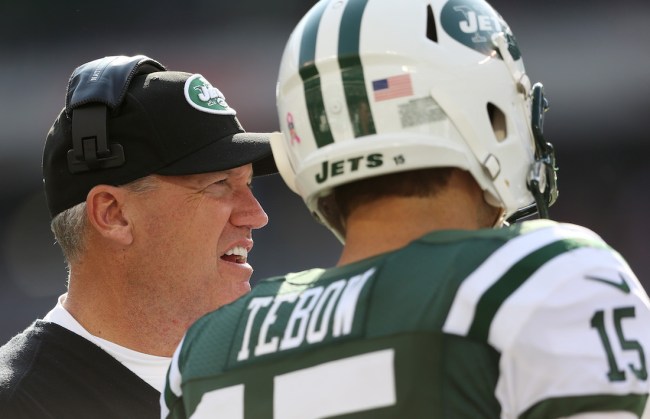 Now that Tim Tebow is an official member of the Jacksonville Jaguars — something that’s causing quite the mixed bag of reactions on the Internet — it’s time to focus on the one thing that’s most important: Can the former Heisman Trophy actually play in the NFL, or is this all just a gimmick from his former college head coach, Urban Meyer? We won’t know the answer to that until Tebow laces up the ol’ cleats in the next few months, but making the switch to tight end will have its challenges.

Then again, will Tebow actually even line up as a tight end for the Jags, or will he only be used there on certain packages around the goal line and on special teams? Nobody knows yet, but Meyer’s certainly got a vision of how he’ll use the former college quarterback.

One guy who knows how to coach Tim Tebow in the NFL is Rex Ryan, who did so with the New York Jets in 2015. Ryan, now an ESPN analyst, discussed how Tebow could bring serious value to Jacksonville now that he’s returned to the NFL, not only saying the obvious — that the 33-year-old provides leadership and mentorship as a tremendously hard worker — but also could become an absolute beast on trick plays and short-yardage situations.

Here’s what Rex Ryan said a successful transition for Tebow on the Jaguars could look like.

“I look at it this way. As a guy who was part of this thing, we brought him into the New York Jets,” Ryan said. “I brought him in to be a personal protector on the punt team. By the way, we were successful on six fake punts with Tim Tebow. I thought he could run some wildcat-type offense. Like Mike Pettine and I used to say, he’s the best-throwing fullback in the league.

“I think we’re going to get that here with Urban Meyer. He’s not an NFL passer. We understand that, but Urban is trying to set a culture. One thing is this guy is amazing off the field. His work ethic, his passion in the weight room, and all that type of stuff is a real positive for your football team.’”

“At the end of the day, this guy may have some value in short-yardage situations running direct-snap runs,” Ryan said. “Believe me. If you’ve got the ball at the one-yard line, I don’t know that I’d bet against Tim Tebow, even now. He’s good as a personal protector. Then, as a fullback or H-back type of guy, I could see it. Is it ideal? Maybe not, but this is Urban Meyer’s guy. There’s no way they’re going to cut Tim Tebow. There’s no chance of it. He’s going to make this football team.”

It’s an interesting angle taken by Rex Ryan, but one that’s pretty damn realistic to expect from Tim Tebow as he reenters the league with the Jacksonville Jaguars. Tebow’s no longer the wobbly, inconsistent passer he was in the past. He’s now expected to be a bullish runner who can either act as a decoy in some sets, or play at other positions in certain situations — something he’s sort of done in the past during his football career. That should add value to Urban Meyer.

Seeing Tebow have immediate success as a traditional tight end would be remarkable given his lack of experience as a pass catcher or blocker, so it shouldn’t be expected. Instead, Rex Ryan highlights what the Jaguars can do to best utilize their new offensive weapon, which could drive opposing defenses crazy.