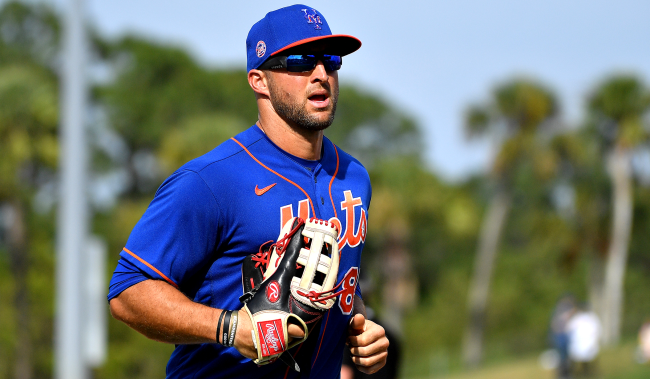 In case you somehow missed it, that headline is not a typo. Tim Tebow, who recently retired from baseball as a .223 hitter in the New York Mets farm system, has announced that he is considering coming out of football retirement to play tight end for the Jacksonville Jaguars.

Tebow, who last played football of any kind in 2012 with the New York Jets, might give the Jaguars a second first round pick in 2021. Granted, that pick is from the 2010 NFL Draft, but hey, your squad has just one winning season since 2008 so it can’t hurt, right?

ProFootballTalk.com reported over the weekend that new Jaguars head coach Urban Meyer said about Tebow, “Tim and I’ve talked about, when he was a quarterback in the NFL that was a big topic. I was so busy, I didn’t give him the time. ‘What do you think? What do you think?’ and I didn’t know, I was too busy to even think it through.

“I know playing a position in the National Football League without — that’s a long shot, this is years ago. How did it happen this time? We had a conversation. He worked out with our tight ends coach, I stopped by, did not stay for the whole workout. Then our focus went to the NFL draft. We’re going to revisit here in the near future. That’s how that all happened.”

Meyer coached Tebow at the University of Florida where he won the Heisman in 2007 and two national championships in 2006 and 2008.

Meyer then added, “I have one job and that is to win games with the Jacksonville Jaguars. If Tim Tebow or Travis Etienne can help us win, then that’s my job to get them ready to go play. That decision is certainly not made yet.”

Tebow is so coming back and playing tight end for the Jaguars.