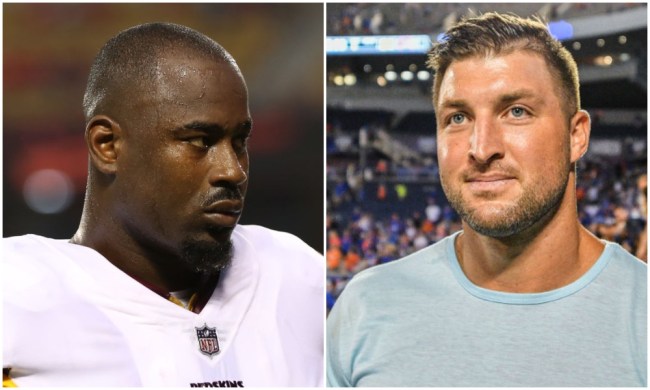 Tim Tebow is expected to sign a one-year deal with the Jacksonville Jaguars as a tight end. While that news is undoubtedly surprising, based on some of the reactions out there, you would think the Jags are signing Tebow to a lifelong contract and giving him the starting QB spot ahead of Trevor Lawrence, but that simply isn’t the case.

Tebow’s one-year deal, if it does indeed happen, is nothing more than a training camp tryout. Many people seem to have forgotten that NFL teams can cut players whenever they want to.

One person that is very clearly losing his mind over the Tebow to Jacksonville news is former NFL linebacker Junior Galette. You may have last heard Galette’s name back in 2017 when a video was released by TMZ of him being tased and arrested after he allegedly ran away from police.

The former Saints captain was quick to give his reaction to the Tebow news on Twitter and even called out one of Tebow’s former teammates, Brandon Spikes.

Spikes responded to Galette’s tweet explaining that Tebow was a proven winner at Florida with Urban Meyer and doesn’t see why people can’t just be happy that he’s getting another shot in the NFL. Gilette immediately turned his attention to race stating there are “real black players” that deserve a shot before Tebow.

Come on dawg don’t do this you have real black players out here that actually played TE young kids that look up to you family come on and Tim Tebow ain’t win a damn thing that Team was STACKED he was legit the worst player on that TEAM that went to the NFL! https://t.co/M3vg5pp8Vw

Galette last played in the NFL in 2017 before refusing to sign a contract extension with Washington. He claimed a “white man from Stanford,” Trent Murphy, was offered a better deal than him. Galette published a three-page open letter to the NFL claiming discrimination. Galette writes in his Twitter bio that he’s “blackballed” from the NFL. He doesn’t have a note about the two torn Achilles he suffered during his career, however, which could be one reason he’s no longer in the league.

It’s clear that Galette and Dez Bryant, who has also been outspokenly against Tebow getting another shot, don’t see this move by the Jags being some sort of a publicity stunt tryout for one of the most beloved athletes of all time.

Sure, maybe the Jaguars’ Tim Tebow experiment actually turns into a very real thing and Lawrence throws the man a touchdown pass this year. However, some people out there need to take a very large step backward regarding this entire situation.