What The Hell Has Tim Tebow Done To Deserve This Kind Of Royal Treatment? 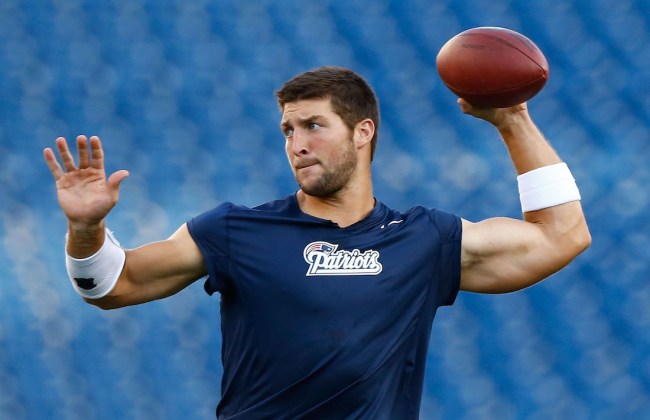 Tim Tebow is one hell of an athlete, there’s no denying that. He went from dominating college football 15 years ago to winning the Heisman Trophy to playing in the NFL to trying his hand at minor league baseball, and, finally, he’s back in the NFL after the Jacksonville Jaguars signed him to play tight end on Monday. But at 33 years old and no experience as a pass catcher, what the hell is going on here?

Honestly, nobody knows. In fact, the Jags adding Tebow has caused quite the (rightful) stir, as current and former Jacksonville players are upset about the signing, while fans voiced their opinions on Twitter about the whole thing, wondering why Tebow’s getting another shot in the league but Colin Kaepernick can’t get a sniff. These are all legit concerns, and just a few that should make everyone wonder what Tim Tebow has done to warrant such royal treatment.

It’d be one thing for the Jaguars to sign Tebow had he accomplished anything during his first stint in the NFL. Here’s the thing, though, he didn’t. ESPN analyst and former No. 1 overall pick Keyshawn Johnson reminded everyone that on Tuesday morning, blatantly saying that “he [Tebow] can’t play,” which can’t be argued based off what we previously saw.

Now there will be plenty of Tim Tebow supporters out there who stand up for their guy and say he just wasn’t utilized the right way during his first go-round in the league. Or that he wasn’t in the right system. Or that he should’ve just been used at quarterback and not tossed around anywhere on the field. Those are all excuses, because he literally played for four franchises in three years, with each coaching staff seeing nothing in him to convince them that Tebow could, in fact, play in the league.

As for the thought that a 33-year-old who hasn’t played in the NFL since 2015 — just the preseason with the Eagles, by the way — can just slide into a new position and start being productive his insulting. Forget the work it takes to be a good tight end and let’s just review how Tebow’s one career NFL receiving target went. Note: Not good.

Tim Tebow has ONE career NFL receiving target and it hit him in the face pic.twitter.com/cB2eW3Ov2X

It’s great that Tim Tebow’s an outspoken leader in his community who hopes to change the world with his personal views. He’s mentored inmates at prisons. He’s appeared as an analyst on ESPN. He’s inspiring millions to follow their dreams despite the opinions of others. Then again, isn’t that part of the reason why the aforementioned Kaepernick isn’t getting another shot in the NFL? That’s a conversation for a different day.

Tim Tebow hasn’t played in an actual NFL game in nearly 10 years. It was December 30, 2012, and, during that season, he appeared in 12 games (starting two at quarterback). For those supporters of his, here are his stats.

Again, somebody, anybody, tell me what the hell this guy has done to warrant another opportunity in the NFL from the Jacksonville Jaguars? Well, other than winning the Heisman Trophy when I (currently 36 years old) was a junior in college. Or, more importantly, having a friendship and being current neighbors with Jags head coach Urban Meyer, with whom Tebow played under while with the Florida Gators.

Every single person should actually feel insulted that Tebow signed with the Jaguars. It’s that feeling of being passed over for a job when you know you’re more qualified than other candidates. When you don’t get let into a bar because you don’t look the part. When you don’t get the match on a dating app because your profile doesn’t include enough selfies. Straight up: It’s more than just a little privilege.

After flopping as an NFL quarterback, failing as a minor league baseball player, and not doing much other than try to create debate with some hot takes as an analyst, Tim Tebow very well could prove everyone wrong and be a serviceable NFL tight end. But other than being a college football icon who happens to be a nice guy, there’s absolutely nothing in his past that suggests he will be. But here’s to wishing him good luck to try.