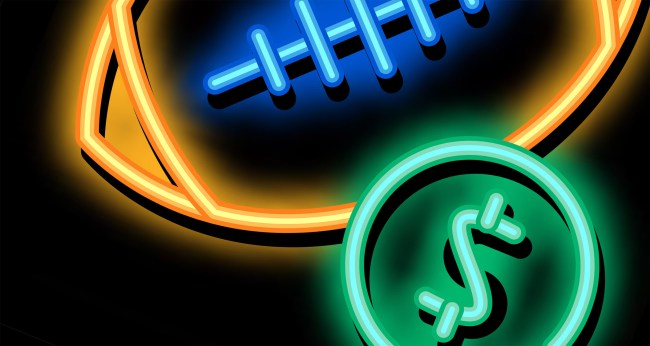 Some people have all the luck. This we know. Counted among those fortunate few is a better from Virginia who magically turned a $50 parlay into nearly half a million dollars this week.

Related: Gamblers Stunned By This 15-Leg Parlay That Turned $50 Into $1.13 Million On A Last Second Score

The big winner bet the first 13 games of the NFL weekend against the spread and won them all. For the 14th game, the Monday night tilt between the Rams and Cardinals, the lucky gambler chose to take the moneyline. That meant it was all on the line when underdog Los Angeles not only beat the spread but won the game 30-23.

Congrats to the #CaesarsSportsbook bettor that hit on every Week 14 game to win their 14-leg parlay! #WinLikeACaesar

What is your best Week 15 parlay? pic.twitter.com/nN2jSi6f01

He wasn’t the only one to win big this past NFL weekend as it ended up being one of the worst weeks of the season for sportsbooks, reports ESPN.

“Everything the public and the sharps backed turned to gold today,” Craig Mucklow, director of trading for Caesars Sportsbook, told ESPN prior to Sunday night’s game, adding that Green Bay covering the spread against the Bears would make for the sportsbook’s worst Sunday of the NFL season.

Jeff Stoneback, director of BetMGM sportsbooks in Nevada, told ESPN, “We hit ugly. One of the worst days of the year.”

Related: Watch This Guy Slowly Die Inside As His $20 Parlay That Would’ve Paid Out $100K Fails To Hit

Jay Croucher, head of trading for PointsBet, said after Sunday’s games, “We needed the New York teams today. Going to war with Mike Glennon and Zach Wilson was taking knives to a gunfight.”

It could be more of the same this week with the Giants taking on the Cowboys and the Jets playing in Miami. Wagering against the New York football teams these days is never a bad bet.