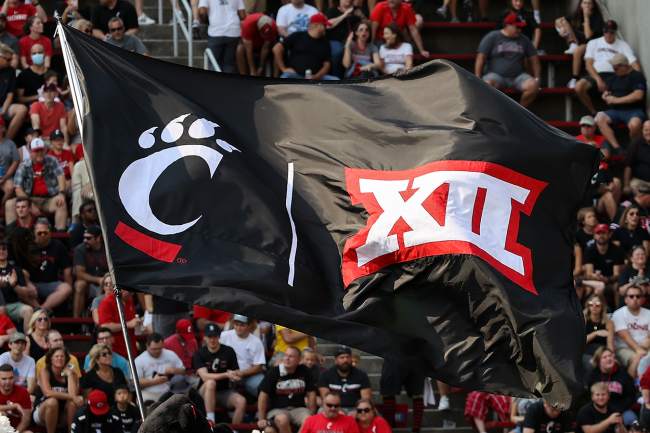 However, Oklahoma and Texas are bolting for the SEC in 2025. Should the two programs choose to negotiate a buyout, the Sooners and Longhorns could exit early— but it is considered unlikely because of television contracts.

To get ahead of the move, the Big 12 is adding four teams that will take the conference to exactly 12 when OU and UT leave.

Those four teams are: BYU, Cincinnati, Houston and UCF. Because BYU is currently an independent program, it is free to join the Big 12 at any time and will do so next season.

The other three are not.

Cincinnati, Houston and UCF are currently part of the AAC. But not for long.

According to college football insider Brett McMurphy, the Bearcats, Cougars and Knights are negotiating a very expensive buyout and will be eligible to join the Big-12 in 2023.

Initially, AAC commissioner Mike Aresco sought $35 million from each school to leave early for the Big 12. However, because UConn paid only $17 million to leave the conference early in 2019, the three schools reached a settlement that meets in the middle.

According to McMurphy, Cincinnati, Houston and UCF are negotiating a settlement in the “$17 million to $20 million range.” It will allow the three schools to leave the AAC early and join the Big 12 on July 1, 2023.

Without the settlement, AAC by-laws require schools to provide 27 months’ notice before leaving and pay a $10 million exit fee. Should the two sides not be able to reach a settlement for some reason, Cincinnati, Houston and UCF would not be allowed to leave until July 1, 2023.

That isn’t going to happen. A deal is going to get done.

Once it does, Charlotte, FAU, North Texas, Rice, UAB and UTSA will join the AAC on July 1, 2023. In the meantime, the Big 12 will be a Big 14 unless Texas and Oklahoma dip out early.