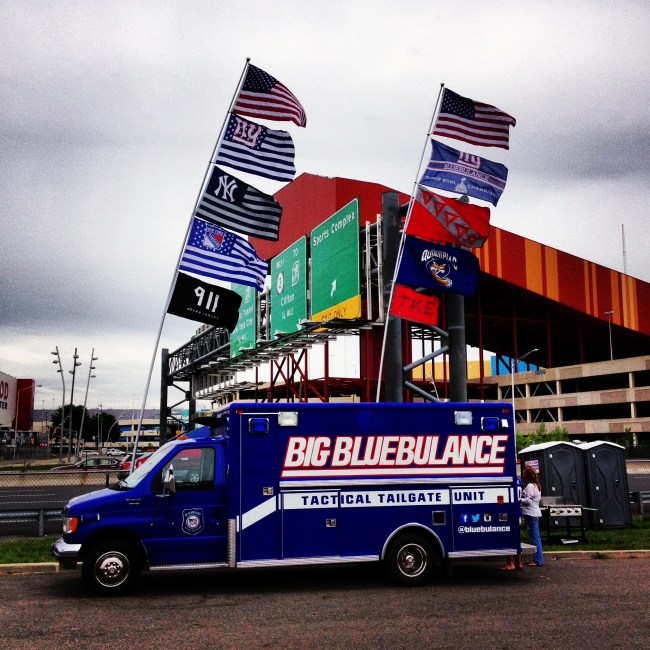 Every group of friends has *that* idea. You know the one — the harebrained, half-assed fools notion that unites the entire squad. The twisted stroke of genius that starts with an afternoon of throwing back Bud Lights and ends with someone saying “we should totally do it…”

Man caves. Cabins. Bars. Joint ventures. Very few of these ideas ever actually come to fruition. But when a group of Quinnipiac University fraternity brothers couldn’t imagine not spending a Sunday Funday together during football season, they made the only logical move: Buy an ambulance. Paint it blue. Go to Giants games to tailgate on game day. Call it the BIG BLUEBULANCE.

If you’ve been to the MetLife’s Stadium’s hallowed asphalt parking lot to tailgate for a Giants game, you’re probably familiar with with the BIG BLUEBULANCE. It’s a fixture at every home game for the past couple years.

Jimmy Stewart, a former volunteer EMT and the group’s de facto spokesperson, explained the history to me in an e-mail: “We all graduated right around the time when MetLife (Giants) Stadium opened. We were all fortunate enough to invest in PSLs to secure tickets, although we all do not sit together. So we have had seats since 2010.”

A few years later, they invested in a used ambulance and embarked on a mission of turning it into the ultimate tailgating vehicle. Here is the story of how a group of Bros actually acted on their dream,  which might be the ultimate #squadgoals. 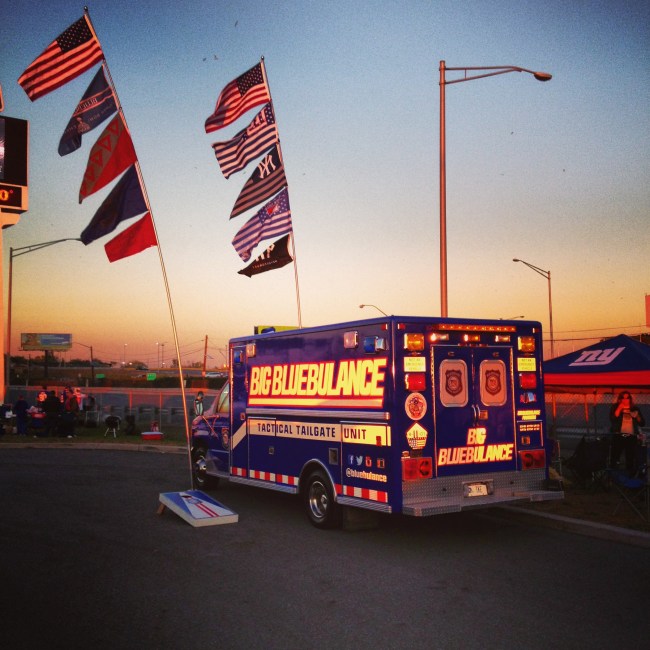 Where are you guys from? What do you do?

There are six of us that are considered BLUEBULANCE Founders and we grew up across NY, NJ, and CT. All but one of us graduated from Quinnipiac University, and we became close friends while enjoying our time in our college fraternity, TKE. We are spread across multiple industries including Finance, Accounting, Technology, Insurance, Healthcare.

How long have you had Giants season tickets?

We all graduated right around the time when MetLife (Giants) Stadium opened. We were all fortunate enough to invest in PSL’s to secure tickets, although we all do not sit together. So we have had seats since 2010.

How did you come up with the idea to turn an ambulance into the ultimate tailgating vehicle?

After we all purchased season tickets we started throwing together our own tailgates which got bigger and bigger week by week. We had so much “gear” that is would take two cars and one SUV to comfortably transport everything to and from the games. It was a hassle to say the least.

We through around the idea of purchasing a tailgate vehicle during the 2012 season. I was a volunteer EMT and sold everyone on considering a used ambulance as our soon to be vehicle, an idea I had for years . The outside storage capacity was great, functionality made sense, ability to transport most of us to and from the game, and the fact that we could customize her and make her absolutely awesome were just some of the selling points. During the 2012-2013 offseason we executed on the idea. The BIG BLUEBULANCE made her debut during the 2013 preseason and the rest is history. 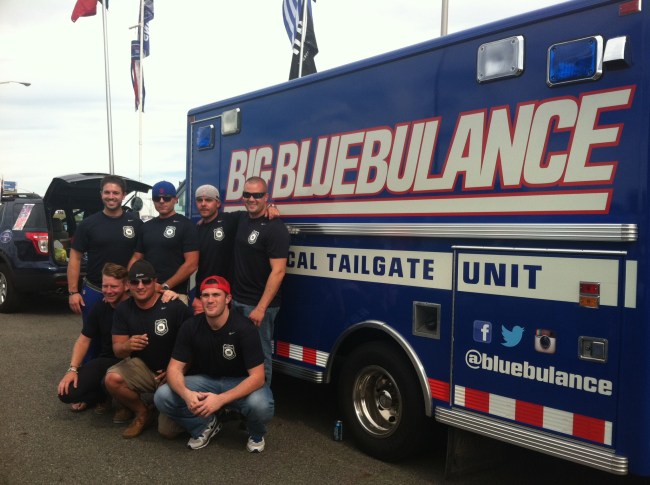 Because it’s AWESOME. But in all seriousness, for a variety of practical reason… The outside of the vehicle is lined with storage cabinets which help make our set up and break down very easy. Everything has its own designated spot and fits perfectly – grill, propane tanks, tents, chairs, tables, generator, flagpoles, corn hole, TV, to name a few. The back of the BLUEBULANCE sits five with seatbelts (plus two in the cabin) and also has tons of shelves and cabinets for all the other smaller gear and serving items. Off the lot, an ambulance is pretty much the ideal tailgate vehicle. Throw in side and rear flood lights (for night games), and of course the light bar – why not an ambulance?

Where did you guys get the ambulance? How much did you pay for it?

I found a used ambulance dealership in PA after looking online for quite some time. I took a day off of work and drove down, and sure enough purchased one of the their busses off of the lot that day. The initial investment was right around 13k (painted), however, with all of the enhancements and repairs we have done to date, I would estimate the total amount into her at this point to be around 35k – 40k.

What did you guys do to the inside to make it the ultimate tailgating vehicle?

The inside is still a work in progress and sadly we have not done too much, as of yet. During the past few offseasons we have had to put thousands upon thousands into repairs to keep the BIG BLUEBULANCE on the road which ate in to any interior upgrade budget. It has been imperative that we keep that actual tailgate as great as possible with the unfortunate restraints we have had.

We have pretty grand plans, though. We want to put in astro-turf, LED lighting, upgrade the sound system, retractable TV, LED Whelen Messanger in the back (similar to the back of NYPD cars – lightbar that scrolls messages – we’ve already purchased), a keg-orator — all of which there is plenty of room for. Maintenance has just been overwhelming and has prevented us from executing these items to date. Don’t get us wrong though…the inside is still very nice and people do hang out inside, especially when it gets cold. But it is just still a bit “ambulance” and not tricked out to where we want it to be. 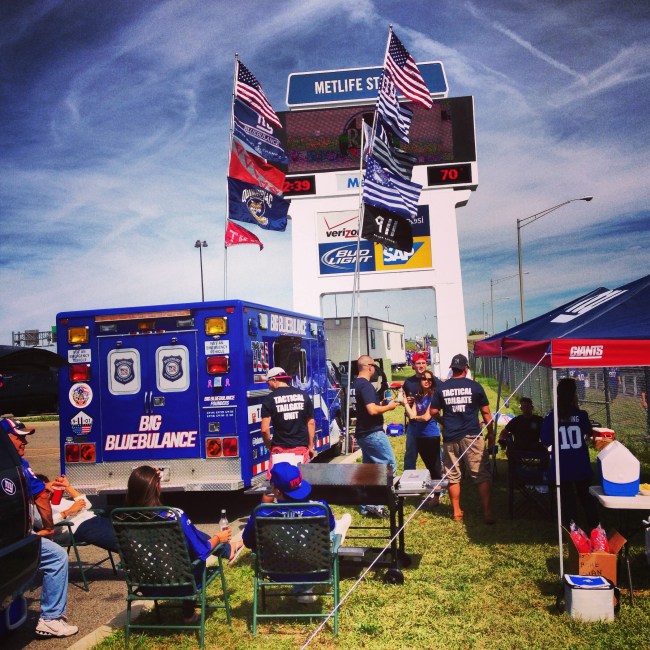 What are some of the best tailgating memories you have with the Big Bluebulance?

There are many. We have a tradition after we break down the setup and before we head into the game – everyone shotguns a beer. We have had grandfathers, moms, etc. participate. It gets everyone ready to go.

We have also been through our fair share of 10×10 tents…which is kind of a running joke amongst our guys. One time, on a particularly gusty day, we had one tent take off and go about 30 feet in the air towards the highway. It literally bounced off a highway sign an back into the parking lot totally mangled. We are incredibly grateful it didn’t cause an accident or hurt someone – it could have been a serious issue. Needless to say, we are pretty good about securing those things into the ground now. It would take an act of God to have that happen again.

We also always have people stopping by and taking pictures asking for tours. We are probably the friendliest group of guys and always enjoy / welcome anyone who is interested in checking out the BIG BLUEBULANCE, even if you support another stupid team.