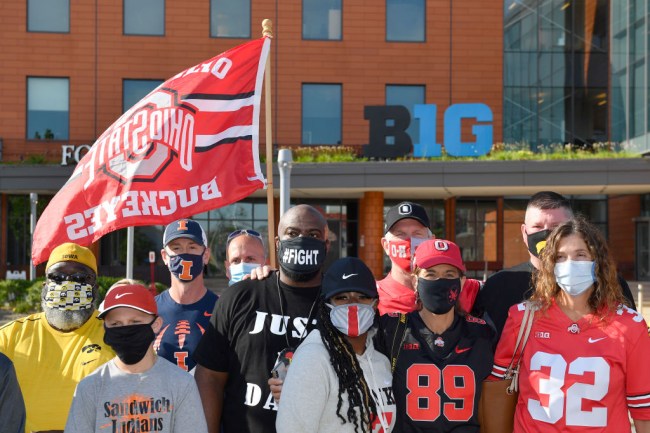 A number of Big Ten football parents took part in a protest at Big Ten headquarters in Rosemont, Illinois this past Friday. While it wasn’t necessarily a large crowd, it wasn’t a ‘planned’ protest, and given the circumstances of the pandemic, it’s understandable that the crowd was limited.

This all began when Randy Wade, father of Ohio State defensive back Shaun Wade, made waves earlier last week when he announced that he would be traveling to Big Ten headquarters from Florida demanding answers as to why football season was canceled this fall.

“How many petitions must there be for the Big Ten to actually look into this?” Wade told ESPN. “We only have a certain amount of time to correct this, so we need to come together and show more unity and just make them uncomfortable, make them come out of their shells and give us some answers to some questions and hopefully rewind back and open things back up.”

Wade isn’t done after just one protest. He’s now planning another for this upcoming Friday on Ohio State’s campus. With this one being planned and this story getting so much publicity chances are there will be a large crowd of people joining in the cause at the end of the week.

We will meet at the Rotunda at the shoe 11:00am this Saturday… The Ohio State parents association is leading the charge for continued answers…. We ask other Big Ten associates parents to join us or do the same at their perspective schools… #Fight pic.twitter.com/rXajncKj25

Wade certainly isn’t the only Big Ten football parent upset with the conference’s decision to cancel football and other fall sports. Over 180 parents of Iowa football players wrote a letter to the Big Ten offices demanding answers as well.

Initial reports about the situation suggested that 12 of the 14 schools in the conference voted in favor of canceling football this fall. This past weekend, however, reports explained that every single Big Ten athletic director wanted to preserve this fall’s football season but university presidents, chancellors, and Big Ten commissioner Kevin Warren had other ideas.