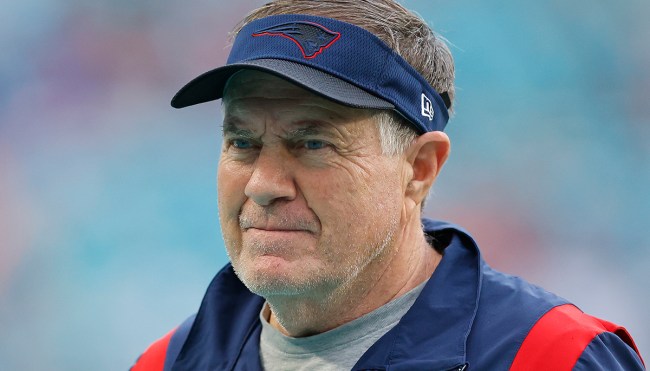 It’s been more than two decades since Bill Belichick became the head coach of the Patriots on his way to cementing his status as one of the most legendary minds the football world has ever seen (with a little bit of help from the quarterback he drafted with the 199th pick in the 2000 NFL Draft).

We will eventually live in a world where Belichick no longer patrols the sidelines. However, much like discussing Tom Brady’s retirement has become the ultimate exercise in futility, talking about the day Belichick decides to hang up the headset feels kind of like speculating about the heat death of the universe.

It may be inevitable, but there’s no telling how long we’ll have to wait for it to actually happen.

In 2009, the man who’s played a pivotal role in bringing the Lombardi Trophy back to Foxborough on six different occasions said he was planning to walk away from the sport by the time he turned 70. However, he walked back that claim a few years ago, and barring some wildly unexpected development, Belichick will be coaching his first season as a septuagenarian when he kicks off his 28th campaign as an NFL head coach (five of which came during his time with Cleveland) in September.

It wouldn’t come as a huge surprise to learn Belichick secretly dreads the idea of retiring; he comes off as one of those people with an existential fear of waking up in the morning knowing there’s nothing they have to do. When you combine that vibe with his passion for coaching, it’s difficult to imagine he’d quit cold turkey—which makes a seemingly outlandish claim that recently surfaced concerning a potential pivot seem surprisingly plausible.

On Monday’s episode of Pardon My Take, Premier Lacrosse League co-founder Paul Rabil said he’s previously chatted with Belichick about the possibility of coaching a team in the league when he retires from the NFL and claimed he seemed “interested” in the possibility.

It’s safe to assume the PLL hasn’t engaged in the kind of talks that led to Fox preemptively securing Brady’s talents as an NFL analyst, but Rabil did a solid job explaining why Belichick would be a fairly natural fit, saying:

“I feel like he would win within the first three seasons of coaching, if not sooner. I don’t think he really coaches football; he just coaches. He coaches human beings, he’s so good at that…

When I first met him, he came to a [Johns] Hopkins practice. He stepped into the locker room and was motherf—king us up and down around, like, our stickwork and our six-on-six possession.

He’s got photographic memory, so he just commands a room.”

As Bleacher Report notes, Belichick did play lacrosse in college, so while this does seem like a big of a long shot, crazier things have happened.