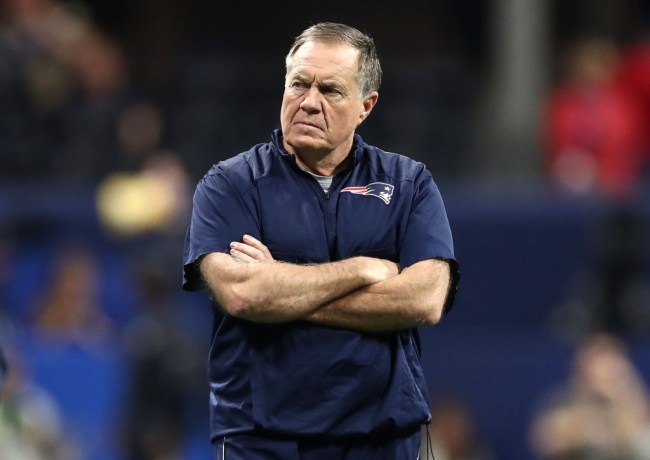 On Sunday, Bill Belichick secured his 300th win as a head coach in the NFL when the Patriots surprised literally no one by beating the Browns thanks in no small part to the dumbassery of Freddie Kitchens as well as Baker Mayfield’s poor decision making.

Belichick caught plenty of people off guard by being visibly delighted after the win when Robert Kraft lauded him with praise and it’s safe to say the coaching legend deserved some recognition when you consider how much he’s accomplished over the past couple of decades.

There’s virtually no chance New England would have won six Super Bowls without Belichick at the helm, and as things currently stand, they’re well on their way to securing another one.

Of course, all good things must come to an end and the Patriots will at some point succumb to the passage of time, as Tom Brady can’t play forever despite being seemingly ageless.

Belichick, on the other hand, is currently 67 years old, and in 2009, he claimed he’d was planning on hanging up the headset by the time he hit his 70s, saying he didn’t want to follow in the footsteps of former Bills coach Marv Levy.

However, it appears he may be having second thoughts.

On Monday, Belichick chatted with WEEI and addressed the topic of his potential retirement, and based on what he had to say, any NFL fan who was hoping he would honor his prior commitment will be extremely disappointed.

Bill Belichick said in ‘09 documentary that he wouldn’t coach into his 70s. He was asked about that by @OMFonWEEI today.

“When I said it, maybe I didn’t know what 70 felt like,” the 67-year-old Belichick said. “So I’m not really sure if that’s an accurate statement today or not”

Sure, a lot can change in three years so you never know what’s going to happen when 2022 rolls around, but if you’re hoping Belichick rides off into the sunset when Brady does, you might not want to hold your breath.