Bill Belichick To Kid Reporter At Press Conference: ‘Fantasy Football Doesn’t Mean Anything To Me’ 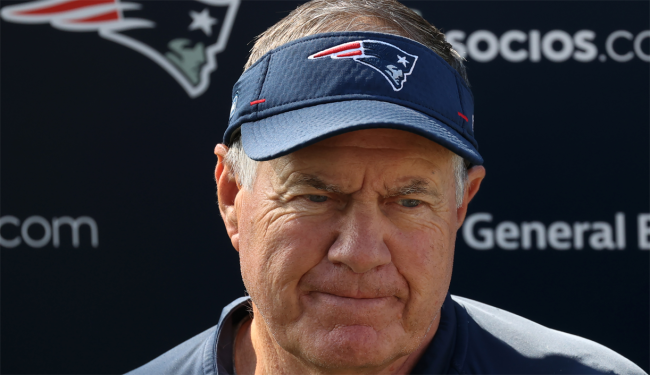 Bill Belichick has no time nor interest in frivolous things like SnapFace, InstantChat, MyFace and Yearbook. Nor does he rarely have time or patience for things like the media.

So it was a perfect storm of things The Hoodie doesn’t really care for when a 14-years-old kid reporter hit him up on Thursday with a question about fantasy football.

“My friends and I watch a lot of football, more than our moms would like, and we’re obsessed with fantasy football,” the kid began. “Even though you don’t like, you don’t play, do you think it’s a good or bad for the NFL?”

“Yeah, honestly, I don’t really have any opinion on that because fantasy football doesn’t mean anything to me,” he responded. “We’re just trying to win games out here, so I don’t know who’s hot, who’s not, who wins, who doesn’t. I don’t really care about that. I just care about whether we win. So, yeah, have fun with that!”

Note: Belichick did smile after giving his answer so he isn’t completely devoid of human emotion.

Signed, anyone who has ever rostered a Patriots running back

Yeah we know, that’s why we don’t draft none of your WRs.

That's because this gentleman drafts his teams and the teams are never good pic.twitter.com/xVKIrbERzT

Earlier in the media session, the same kid reporter asked Belichick if he and the team planned on celebrating Kendrick Bourne’s birthday, which is today.

“Of course, yeah, we had Henry Anderson yesterday, K.B. today. Yeah we’ve had a bunch of birthdays,” Belichick replied. “So yeah, we try to recognize those. Sometimes they slip by, some guys want to be recognized, some players don’t, some of the older coaches don’t necessarily need that, uh, but yeah, sure we’ll get it.”

It’s going to be a very sad day when Bill Belichick finally retires and is no longer doing interviews.