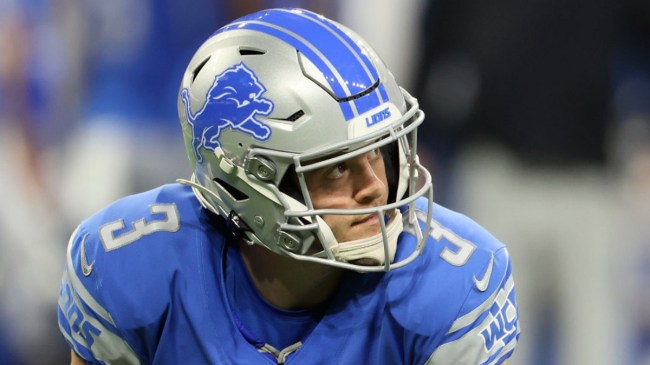 This weekend, the New England Patriots will be taking on the Detroit Lions in a battle of 1-3 teams.

While the teams have identical records, they have very different issues that have led them to win only 1 game so far this season.

The New England Patriots have struggled to score early in the year, due in part to their strange management of their offensive coordinator job.

Meanwhile, the Detroit Lions have had no trouble scoring, but their defense had been the worst in the league. So far this year, they’ve allowed opponents to score 38, 27, 28, and 48 points, but their offense has kept them in games.

Today, Bill Belichick was discussing his upcoming opponent when he directed some praise at a surprising player. He had high praise for Lions punter Jack Fox.

Bill Belichick on @MrJackFox: "Fox is a weapon. He is a weapon: kickoff, punt, punt for accuracy, punt for distance, can throw it like a quarterback. That was a long throw, 15 yards deep, good coverage and he put it right there."

Belichick praising a special teams player isn’t a huge surprise given his history as special teams coach and proclivity for finding hidden gems to play special teams for the Patriots. What is surprising is that this is the player he would choose to praise on the Lions.

Fox hasn’t been particularly busy lately. He only punted twice last weekend for the Lions and only 3 times the week before. He was called into action against the Seahawks to throw a 6 yard pass, but the Lions offense has been making sure to give him as little work to do as possible this season.

The Patriots are going to hope to see a lot more of Fox this weekend than the Lions’ other opponents have been seeing lately.