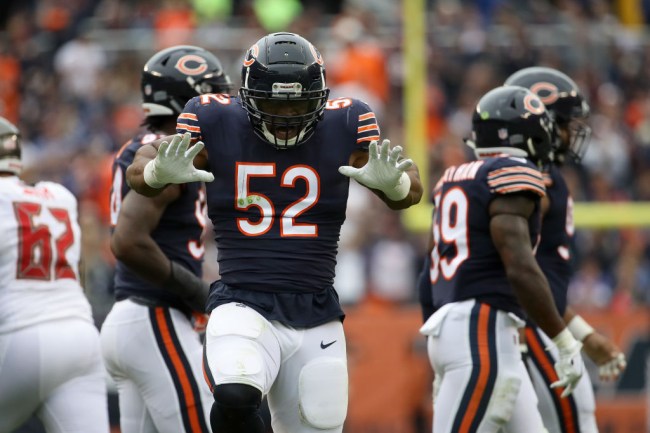 Through the first five games with the Chicago Bears, Khalil Mack has been an absolute problem for opposing offenses. The 27-year-old the former Defensive Player of the Year has five sacks, four forced fumbles, and one pick six, making him every penny worth the $141 million the Bears shelled out to lure him away from the Raiders.

Von Miller has called him “untradeable.” Bears running back Tarik Cohen said he was “built like a Greek God.” Raiders defensive end Arden Key called him a “freak of nature.”

Patriots coach Bill Belichick, who will face Mack and the Bears this Sunday, showered Mack with high praise during a Wednesday morning press conference, but stopped on a dime when a reporter attempted to make the comparison between Mack and Lawrence Taylor.

Reporter: Bill, you’ve seen a lot of good pass rushers in your career, starting with Lawrence Taylor, Reggie White. Does Mack sort of rank up there as one of the better ones you’ve seen?

Bill Belichick on if Khalil Mack is up there with Lawrence Taylor:

Belichick of course coached Taylor as a defensive coordinator on the Giants in the 1980s and openly considers Taylor to be the perfect football player. As NESN points out, Belichick once called Taylor “the best defensive player I ever coached, by a good margin” and when Tom Brady was asked what makes his coach smile, he responded with: “Navy, lacrosse, Bon Jovi and Lawrence Taylor.”