Would The Patriots Trade Bill Belichick To Start Its Rebuild? It’s A Wild Idea Suggested By Peter King 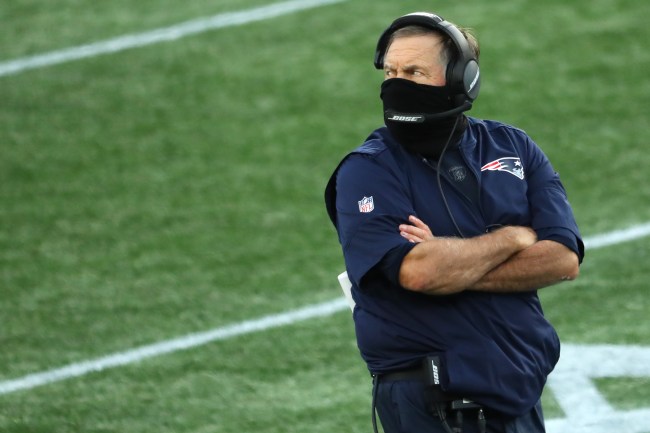 Bill Belichick and his New England Patriots haven’t had the season the team had hoped for, nor have come to expect. Over the past 20 years, the Pats have played in nine Super Bowls (winning six), while winning at least 10 games in every one of those seasons but one (where they “only” won nine), so the fact that the team sits at 2-5 heading into Week 9 of the NFL season is incredibly disappointing.

To similarly echo the words of the great Rick Pitino, “Tom Brady isn’t walking through that door,” as the Pats seem lost offensively with new quarterback Cam Newton, who doesn’t seem to be the answer under center many in New England had hoped for. And, as we all know, if a team doesn’t have a starting quarterback, they don’t have a plan.

So here we are, midway through an abnormal NFL season, and Bill Belichick and the Patriots look… lost.

Is it panic time in Foxborough? Given the team’s history and success, probably not. But that doesn’t mean some analysts aren’t already thinking about ways the team can improve — with some even suggesting trading away the next decades-worth of draft picks to get a guy like Trevor Lawrence in the 2021 NFL Draft.

While trying to get Lawrence is one option, another one might be New England trading away Bill Belichick in order to kickstart its rebuilding process. We’ve seen this happen before in the NFL, so would the Pats think about doing it themselves to rake in assets for their Hall of Fame head coach? It’s a wild though, but it’s something Peter King recently suggested.

.@peter_king on the idea of the #Patriots trading Bill Belichick: “I don’t think it’s a dumb idea,” pic.twitter.com/ou87vxAQ6b

“Like, probably right now, you would think if you traded Bill Belichick you should get two 1s, you think that’s about right,” King said. “Especially not really knowing how much longer Bill is going to coach, he’s getting up there in years and you don’t really know how much longer he’s going to coach, so are you going to trade two 1s for a guy who might only coach for four years? I think it’s an interesting thing. I don’t think it’s something you should dismiss out of hand.”

After Pats fans watched Tom Brady leave via free agency this past offseason, then see the team trade Rob Gronkowski to join the GOAT in Tampa, it’s probably too much for loyal supporters to fathom the franchise openly trading Bill Belichick. But, as King writes, it might be something New England at least explores as the front office figures out what’s next for this team.

Look, if you’re Belichick and you know your team isn’t going to compete for championships, why waste the last few years coaching in the NFL rebuilding? It’s not in his DNA to do that. So, as insane as it would be if it happened, maybe the two sides find an opportunity to end the longtime relationship in one of the more unorthodox ways possible? Hey, it’s 2020, so anything can happen.