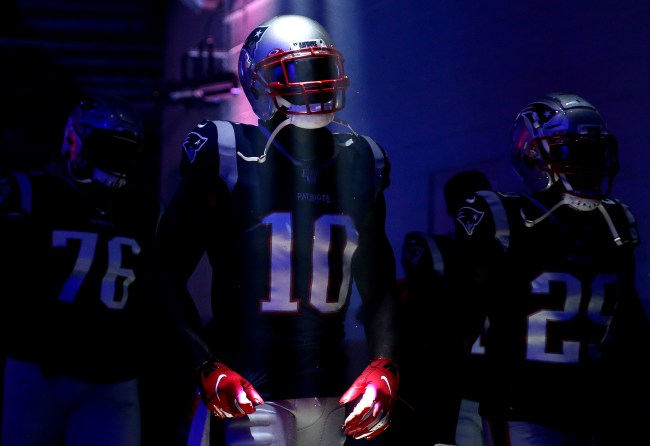 Stop me if you’ve heard this before, but Josh Gordon is back.

In his first game since December, the newly reinstated Patriots receiver hauled in three catches for 73 yards and a touchdown in the Patriots 33-3 mushroom-stamping of the Steelers Sunday night, but more importantly, he seems to be humbled and committed to doing his job in a regimented environment.

In his first interaction with the media since he was banned by the NFL in for violating its substance abuse policy last season, Gordon quelled concerns from Patriots fans over how he’s re-acclimating to The Patriot Way (TM).

“I’m doing very well,” he said. “I’m extremely filled with gratitude every day, just enjoying myself. Coming inside this building, being with this family-oriented type of environment, and just doing what I love to do. There’s nothing better than this, honestly. It’s great.”

With the Patriots adding Antonio Brown to a stacked receiving corps that includes Gordon, Julian Edelman and Philip Dorsett (all at the meager cap hit of $16.5 million for 2019), Gordon knows all too well that AB’s antics aren’t going to fly on a team that doesn’t need him as much as he needs them.

“Antonio is Antonio,” Gordon said. “He’s going to have to figure out his own way, just like everybody else has.”

Gordon also expanded on how New England’s culture squeezes out players who aren’t committed to team goals, which is a huge adjustment for star players.

“For me, initially it was a culture shock,” Gordon said. “It was definitely different. I think as I grew in this environment and got to observe other young men move and organize and act professionally, expectations were high. It wasn’t anything more than what I think they knew that they could do was being asked of them. I was like, “Alright, this is the way it’s done here.” I could either get with it, or look for a transition somewhere else. It’s tough, but if this is what you want to do, I think this is the best place to be.”