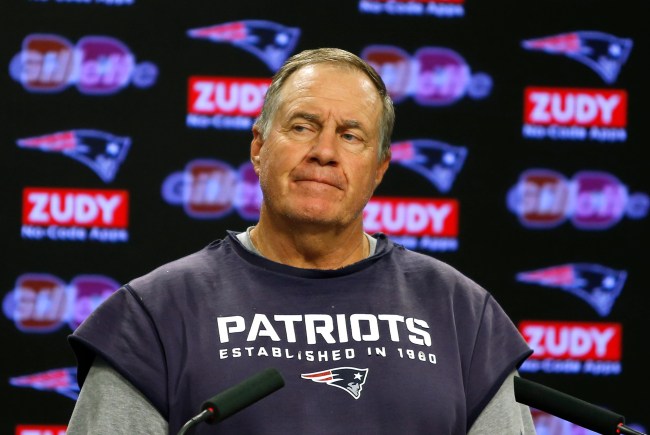 Bill Belichick is known for being super surly with the media. For years, the New England Patriots head coach has ducked questions over and over during press conferences, has refused to reveal much information about his team or his gameplan, and, more recently, even ditched a media session the other day after being asked a bunch of questions about embattled receiver Antonio Brown.

Oh, and then there was that death stare Belichick gave Dana Jacobsen this past Sunday when asked about Brown again, with the video going viral because the head coach literally ate the poor reporter’s soul with his eyes. Yep, when it comes to speaking with the media, Bill Belichick sure doesn’t seem like he’s a big fan of it.

But that might not have always been the case, because, during his days as an assistant coach under Bill Parcells, Belichick seemed totally cool to speak with reporters; specifically giving insider info to longtime reporter Rich Cimini.

While appearing on the New York Jets’ pregame show this past Sunday, Cimini detailed these secret meetings he used to have with Belichick, describing how he would call the coach each week to signal that it was time to chat. Take a look below at the full story.

For those asking – here is the story @RichCimini told during our pregame show about his “secret” meetings with Belichick. #classic #Jets #NYJ pic.twitter.com/IDFdiXvjoJ

Seems kind of sketchy, right? Well, given Bill Belichick’s history of, uh, bending the rules, it sure seems like the now head coach was up to something. Then again, who knows if there was anything really going on that was against the rules — other than Belichick going against Parcells’ rule of assistants not talking to the media.

We all know that Bill Belichick is going to do nearly anything he can to win. Whether that’s working behind-the-scenes to do things that aren’t “technically” prohibited by the league, or taking a chance on a guy with a checkered past — as he did Antonio Brown — to try and prove that the “Patriot Way” is, in fact, a real thing, we all should expect stories like the one Cimini told to pop up every once in awhile. Hey, in Belichick’s mind, if you ain’t cheatin’, you ain’t tryin’!