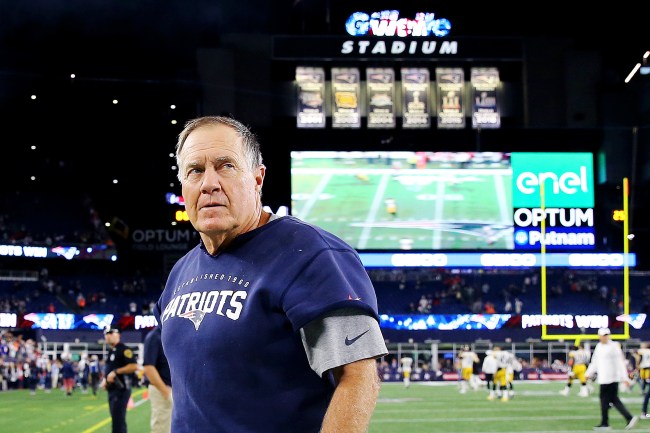 It’s put up or shut up time for Antonio Brown after he manipulated his way out of $29 million guarantee from the Raiders to take $10 million in guaranteed money from the bitter rivals of the team he spent his entire career with.

Bill Belichick is now tasked with reasoning with the unreasonable, territory that is not unfamiliar to him, taking on high-risk players like LeGarrette Blount, Albert Haynesworth, Aqib Talib, Chad Ochocinco, and his crowing achievement: Randy Moss.

Belichick helped to revitalize Moss’ career in 2007 after a so-so season in Oakland, to the tune of three 1,000-yard seasons and 50 touchdowns in a shade over three seasons with the Pats. The price: a fourth-round pick. Sheesh.

Belichick spoke to reporters Monday, and was asked if he foresees Antonio Brown’s immense baggage derailing an already stacked team. His response was great.

Bill Belichick responds to concern about Antonio Brown being disruptive: "that's what you said about Randy Moss when we brought him in, so." https://t.co/2GhEPzqoMO pic.twitter.com/XgP8sgQJKt

Former Patriots linebacker Tedy Bruschi saw it a bit differently than his former coach during his appearance on “NFL Countdown” saying:

Moss himself, now an ESPN analyst, appeared on “NFL Countdown” to share his thoughts on the AB signing, and reinforced the idea that it’s shit or get off the pot time for the All Pro.

“Every time in the last month or two that Antonio Brown has showed up on your phone or any server, it has nothing to do with football. The next time I see Antonio Brown showing up on my phone, it’s gotta be touchdown,” he said on the “NFL Countdown” show, throwing his pen for emphasis. “That’s all I want to hear from here on out. Football, football, football!”

Tom Brady is already throwing to the most stacked receiving corp of his entire career. If they can get AB on board, the Patriots are going to be ’07 scary.