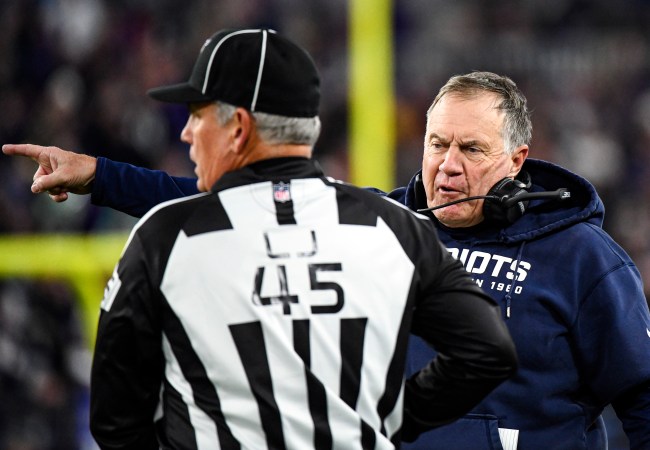 It’s been over a year-and-a-half since Eagles right tackle Lane Johnson described the Patriot Way as a fear-based organization and revealed a loser’s mentality by saying, completely serious: “I’d much rather have fun and win a Super Bowl than be miserable and win five Super Bowls.” Um. K.

Johnson has also called the Patriots “arrogant” and ripped Pats players for acting “like f—ing robots.”

After the Eagles win over the Bears before entering their bye week two weeks ago, Johnson alluded to his ‘fun’ comments in the lead up to their matchup against the Patriots, the first time the two teams would meet in the regular season since the Eagles beat the Patriots in Super Bowl LII.

Gonna have some fun at the Linc in 2 weeks!

The Eagles lost, which apparently has no correlation to fun, dropping to 5-5 and a full game behind the Dallas Cowboys in the NFC East.

After the game, Bill Belichick seemed to subtly troll Johnson over his derogatory comments.

Bill’s full assessment of the game:

“It was a really good team victory for us today. I am really proud of the way our guys competed. They just went out there and competed for 60 minutes. I know we didn’t get off to a great start, but we just kept battling and made plays in all three phases of the game. We played for 60 minutes and played some good situational football and made plays that we needed to make to win. Big drive offensively coming off the goal line in the fourth quarter, put our defense in good field position. Defense played really well in the second half. The players covered well, rushed well, and they tackled real well. They just did a good job.

It looked like everyone had fun out there today and we played a lot of good energy and it was good to come down here and get a win.”

If you think it’s a stretch to conclude that Bill’s vague comments were used to troll Johnson, consider Belichick’s history with bulletin board material. In 2008 when then-Dolphins coach Tony Sparano unleashed the Wildcat and secured a win against the Pats, NFL Network’s cameras filmed Sparano declaring “the division still goes through us!” in locker room after the game. Belichick played this clip for his entire team during the following team meeting, effectively mocking the late coach. And this season, Belichick brought Jarvis Landry’s “we’re going to win!” comments to the attention of the team. Spoiler alert: The Dolphins did not win.

In more important news, Belichick made a joke in the post-game presser. No one laughed for some reason, so he probably won’t make another until he wins his 15th Super Bowl.

In most important news, this: