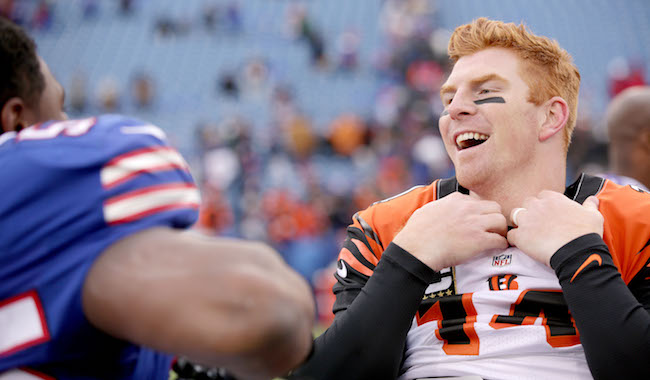 On Sunday, manufacturers of folding tables, lighter fluid, and Labatt Blue rejoiced after the Buffalo Bills secured a spot in the NFL playoffs for the first time since 1999. The Bills did what they had to do by winning their game against the Miami Dolphins, but they didn’t secure their postseason berth until the Cincinnati Bengals stunned the city of Baltimore after Andy Dalton connected with Tyler Boyd to score a game-winning touchdown with 45 seconds to go.

After the game, the Bills sent out a heartfelt thank you note to the Bengals, who will apparently be rewarded with a shit-ton of wings for the assist.

It’s certainly a nice gesture, but it definitely pales in comparison to another gift being sent to Cincinnati by Bills fans: cold, hard cash.

On Monday, the Bengals quarterback hopped on Twitter to thank a number of Bills fans who had decided to thank him for his role in ending their seemingly eternal misery by donating to the Andy Dalton Foundation, an organization devoted to aiding the families of seriously ill and disabled children in Cincinnati and Fort Worth (the city that Dalton calls home).

To all the Bills fans that are donating to my foundation, thank you. We appreciate the support. If you are interested in donating visit https://t.co/9SMNu78Znq

A couple of hours later, the Bills announced that 150 people had helped raise over $3,000 for the charity, but that was only the beginning. Donations began to roll in at a seemingly exponential rate as Dalton continued to tweet out updates, and as of 6:30 PM last night, the foundation had collected $57,000.

In the 24 hours since the 1st donation came in, over 2500 donors and just over $57,000 and counting! Last update for the night! I will update tomorrow. We can’t thank y’all enough!

However, it’s hard to imagine that number hasn’t already risen dramatically. Dalton said that most of the donations were for $17— a number that was picked to commemorate the numbers of years it’s been since the Bills appeared in the playoffs— and when you consider people were donating at a rate of 10 per minute last night, there’s a good chance the next update could surpass six figures.