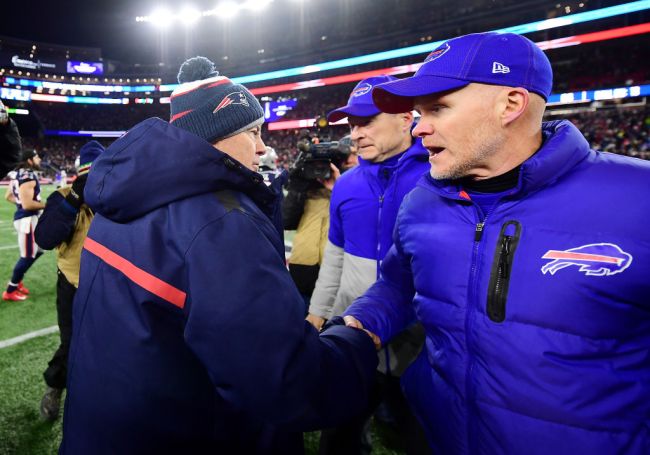 Bills head coach Sean McDermott wants everyone to pump the brakes on calling Bill Belichick a genius for his playcalling on Monday night.

During the Bills-Patriots game, Belichick decided to run the ball forty-six times and only attempted three passing plays all game in the Pats’ 14-10 victory.

Patriots’ 3 pass attempts were their fewest in franchise history and tied with the 1968 Chiefs for 2nd fewest in a game in Super Bowl Era. Bills once attempted two passes in a game vs. Jets in 1974.

Patriots also became first team since 1978 Saints to rush on 90% of their plays.

During his postgame press conference, McDermott downplayed the effectiveness of Belichick’s game plan and basically said the Bills beat themselves by playing “sloppy football.”

Sean McDermott: "Let's not give more credit than we need to give Bill Belichick in this one."

McDermott’s quote didn’t sit well with fans who felt he got outcoached by Belichick on Monday night.

McDermott is great but he got too juiced up for this matchup, got clearly outcoached and should just take the L https://t.co/yytFzpBdUy

Bill Belichick clowned Sean McDermott tonight. Don't get it twisted. Beat him in his house and had his rook QB throw it 3 times. What a joke.

Same guy who said last year surviving Cam Newton and a lesser Patriots roster, "I’m going to go home tonight and take an hour or two to enjoy this with my family."
Belichick owns swaths of land in McDermott's head. https://t.co/0mGBoRkSne

Bill owns a house, three apartments and a condo complex with a pool/rec center/tennis court – all inside this man’s head https://t.co/Wjx8wvg7Tb

Sean McDermott got REAL used to being the “resident genius” of the AFC East that one year the #Patriots were rebuilding.

He, his staff and his team got embarrassed tonight. Embarrassed. Do better. #Bills https://t.co/OTcg6sNJfj